Posted on May 19, 2011 by andyMogg in Beer Reviews, Salopian Brewery 2 Comments

I’ll be honest, I got sent a few bottles of Darwin’s Origin a while back and they’ve all long since been drank and this has been sat here half started and full of short hand so I thought it was about time I finished it off.

“Darwin’s Origin is the brainchild of Debbie at Salopian Brewery,  it’s the most recent addition to the Salopian core range in both cask and bottle. It was brewed to celebrate Shrewsbury’s most famous son Charles Darwin. 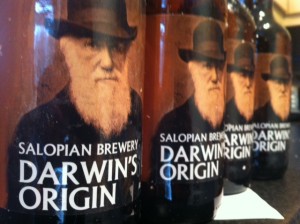 Love the label and the beer!

Like most additions to the permanent range of beers, Darwin’s started off as a monthly special and the reaction of their customers and staff saw it replacing Abbey Gates.”

And I’m not surprised it’s a cracker of a beer. It pours a lovely clear amber with a massive head, which like Zak I thought was a little over the top and possibly the only down side to the beer. Also like I thought it was kind of like  traditionally brewed English bitter. There was a lovely oat and biscuit note to it, with a nice mild bitterness with just a hint of a zing and a little bit of an earthy flavour.

A lot of people probably won’t give this a second glance on the shelf but they don’t know what they are missing, it really is a well brewed beer.

It makes the perfect work night beer, it’s not going to leave you feeling hammered after a couple of bottles. It’s the sort of beer that If they toned down the carbonation I’d happily buy a case of as an after work refresher or an afternoon session.