For Open It day 2 had had planned on drinking more than just one bottle of beer but an impromptu trip out to a lovely sunny Whitby and a tour of a few of it’s fine drinking establishments didn’t leave me with much time or much space in my considerably large beer belly.

Not wanting to miss out on the second day of Open It I decided to go find a random small bottle in the beer cupboard and see how I felt after that. 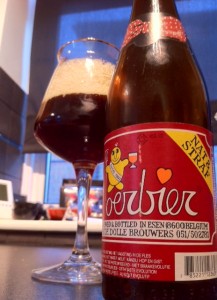 The beer I returned with was a bottle of De Dolle Oerbier, which has quite a fascinating story behind it which you can read here.

It pours a fruit cake brown with an almost red tinge to it, the head was huge, so much so, I didn’t manage to get all of the bottle into the glass straight away.

Like the Mikkeller 1000 IBU yesterday there was lots of brown sugar on the nose although this time it was shared with a lot of sour tart notes…think raw cooking apples or granny smith’s coated in brown sugar with a bit of raisin thrown in for good measure.

In the mouth it was quite heavily carbonated, so it tingled on the tongue for a bit.

Flavour wise the booze was ever present, as was the slightly sour/tart apple flavour but this was offset with lovely spicy christmas pudding notes like currants and cinnamon, maybe even a little clove and nutmeg. There finish was a little boozy and dry, almost reminiscent of an aged calvados or dare I say it good cider vinegar.

I thought it was a great beer but the carbonation spoiled it a little for me, it was quite hard getting through all the fizz.

Unfortunately after that I was still full and wasn’t sure if I could manage another bottle, especially as I quite fancied something dark and peaty, not wanting to risk opening a bottle that I couldn’t finish or wouldn’t enjoy as much as if I wasn’t full. I decided to go and see what whisky I had kicking around, when I remembered that I had some of a Masters of Malt Dram set left.

I will blog on Master of Malt later on, once I’ve drank all the Dram’s but so far I’ve been very impressed. Firstly It was a Christmas present from my brother, secondly  the very cool packaging contained 5 super peaty whiskies for me to try and thirdly they had apparently ran out of one in the pack so they replaced it with the dram I was about to open…Brora 30 year old 2009 release. 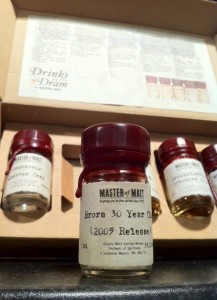 Out of the Drams in the pack I didn’t know much about the Brora. A quick search of the Master of Malt website showed that it was a whopping £255 per bottle or £14 for the dram, which in all honesty scared the shit out of me. I mean £255 for a bottle of whisky…WOW.

As a result the Brora dram has sat in the cupboard waiting for a special occasion or an excuse to open it, well what better time than now I thought.

I cracked open the wax seal, twisting the lid off carefully so not to spill any of the precious contents. The first thing that hit me was the smell, It was really boozy, It smelled like it was going to burn and burn hard, not surprising at 53.2%ABV.

I poured it into a crystal whisky glass I inherited from my nan and swirled it round andonce I got past the alcohol there were subtle sweet vanilla and oak notes with some hot dry peat wafting through.

In the mouth it really surprised me, the sweetness of the vanilla came through with a little bit of honey or maple syrup then there was a definite lemon and orange zing to it which I wasn’t expecting, then the peat battered it’s way forward, deep, earthy and smokey, It reminded me of walking on the moors on a hot day. After that the heat came through with a little bit of a burn and touches of peppercorn , much less than I anticipated and quite smooth despite the heat.

In all honesty I have no idea if this makes a great whisky but in my opinion this is was a seriously good whisky, It was right up my street, I loved the sweet mellow notes and adored the big hitting peat.  I’d love to drink it again but not at £255 a bottle.

On that note it was a perfect end to open it day to which I think captured one side of the idea behind it quite well.