I first came across Doctor Okells IPA in the summer, when I bought some when in the Lake District, after trying it when we got home I wished I had bought more, then a few months ago when I was looking in the cheapo shop’s in town I saw that home bargains were selling it for 69p a bottle, I couldn’t believe it, that was way cheaper than the first bottle I had bought, so I snaffled a full case.

This review was based on the penultimate bottle of that case, every bottle was as good as the last which is definitely a great sign. 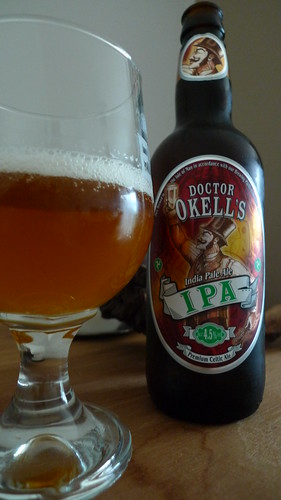 Doctor Okells IPA is a light and refreshing beer, it comes in at 4.5% ABV which is a lot lighter than some of the IPA’s, like Adnams Innovation, Thornbridge Jaipur and Thornbridge Halcyon, that I have been drinking of late, But it easily stands up to it’s stronger rials.

It pours a lovely light golden colour, with a slight haze, which I think probably comes from the hops, the aromas are of hops and flowers with hits of sweetness and citrus, the head was quite big yet light and bubbly, it lasted down the glass too.

For a light beer of 4.5% Doctor Okells IPA doesn’t half pack a punch, its crammed full of juicy, light and refreshing flavours, There is lemon, caramel, malt and lovely flowery notes which reminded me a little of Badger Champion Ale, after all of those flavours have filled your mouth the hops create a lovely bitterness that balances the other flavours out and cleans your palate leaving that lovely bitter hoppy after-taste in your mouth, which I think characterises a great IPA.

For me this is up there with my favourite beers of the year, it makes a fantastic session IPA  and at 69p it is an absolute bargain, I have no idea how they sell it so cheap and I am a little bit gutted they haven’t had it back in since. If all of Okells beers are this good then the people on the Isle of Man must be very happy indeed.

I’ve not seen any of their other beers in shops but I am certainly going to track some of them down as it looks like they make some interesting beers that cover a wide range of styles.