Moor’s was one of those breweries i had heard whispers about and something i had never managed to track down,  Then a certain Internet purveyor of fine ales (who will be the cause of my divorce*) started stocking them, funnily enough around the time i was just about to order a few of the new Mikkeller Beers he had in. So i risked the wrath  of  SWMBO i added a couple of bottles of Moor to my order. 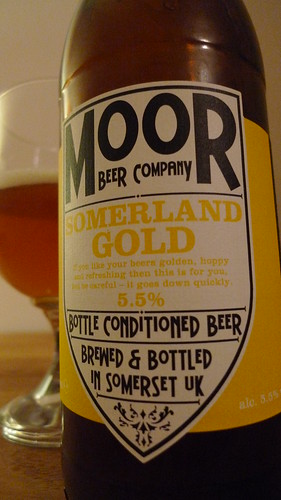 Now they aren’t cheap, at £4.50 a bottle but they aren’t so pricey you don’t want to drink them, for one the bottle is 660ml so its bigger than your usual bottle of ale and secondly the labels are brilliant.

When I say brilliant i mean they are simple, yet packed with info (along with the cool little slogan “Drink Moor Beer”) and also as strange as it seems, they feel really, really nice, they have used a lovely weight of textured paper and this really does add to the sense of occasion.

Anyway enough talk of the packaging as we all know that you shouldn’t judge a book (or bottle) by it’s cover.

Somerland Gold pours a really lovely golden colour, but then you would be gutted if it didn’t given it’s name. It did have a little bit of a haze but it is bottle conditioned so we can forgive it that much.

The head isn’t huge but it does last really well, its light and frothy with a slightly creamy tinge.

My first reaction to the taste was WOW! It was light yet full of flavour, the hops hit you straight away you then get some of the malt coming through and a little bit of citrus as it fizzes up your tongue….this then lasts and lasts – it leaves your mouth tingling with joy and wanting to drink Moor and Moor of it. (see what I did there??)

I was trying to think of other beers that it compared to – it’s not quite as brutal as Thornbridge Halcyon or Mikkeller Stateside IPA, i think it’s a bit lighter and maybe a touch more balanced than both of those, it’s also possibly more drinkable than those, i supped this bottle in no time…well apart from half a glass that i gave to Emily, she also thought it was very tasty but maybe a little on the hoppy side for her.

All of the afformentioned ales are in my top 10 so it would certainly put Somerland Gold up there with the best ,It would also  seem that Somerland gold is often regarded as the poor brother of Moor JJJ, if that is the case then I am certainly in for a treat when i open my bottle of JJJ.

It might not be the time of year for drinking summery IPA but if you see this beer i urge you to give it a try.

Check out their website @ www.moorbeer.co.uk – their t-shirts look cool!

*Well he will be should we ever take the plunge and get hitched.