I know Mark does FABPOW’s quite a lot and they are great, I thought I would have a punt at it this week after first coming across this pairing when camping in Northumberland a few weeks ago.

We were on Holy Island and some how manged to choose a day to visit when most of the place was shut, after a coffee and danish pastry we had a wander round the island, which doesn’t take long as its only about 8 or 9 miles. As we couldn’t get back across the causeway for at least another couple of hours we checked out the pub that was open followed by a hotel come cafe-bar. It was here in the hotel’s garden I discovered what is 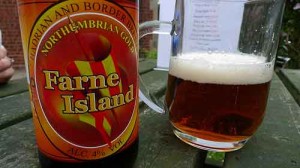 Farn Island Beer in the sun

now one of my favourite beer food pairings.

It’s made of ingredients that might make you think WTF? but trust me it really works. The one on Holy Island consisted of half a stottie (a huge Geordie bread bun, see here) which had been lightly toasted, inside this behemoth of a bun were 3 or 4 slices of local, thick cut smoked bacon, which had been cooked just enough so the fat was crispy but the bacon was still lovely and tender, on top of this were a couple of slabs of melted brie followed by a really good dollop of cranberry sauce, yes you read that right, cranberry sauce. The sandwich on its own was an absolute triumph, crispy bread, juicy bacon, sweet cheesy brie and tangy cranberry sauce. WOW.

This was unintentionally paired with a bottle of Hadrian and Border Farn Island Ale, A lovely amber bitter which on it’s own doesn’t amaze, don’t get me wrong its a lovely ‘normal’ bitter with hits of malty nutty sweetness and a light hop bitterness but it’s not going to blow your socks off….unless that is you pair it with the Bacon, Brie and Cranberry Stottie then it really is something special.

The bittersweetness and nuttiness of the beer works really well with the sweet brie and tangy cranberry, it’s no so powerful that you loose the flavour of the food nor is it so weak that you can’t taste the beer it’s self. Other than that I don’t know why it work’s it just does. 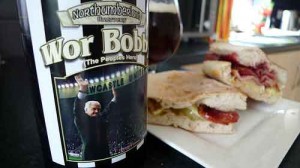 Since returning from Northumberland I thought I would retry the combo just to make sure it wasn’t one of those of the moment things, as the setting and weather could well have had it’s part to play.

This time I teamed the stottie up with Northumberland Brewery’s Wor Bobby Bitter, which was brewed to celebrate the life of Geordie legend Sir Bobby Robson. Again it worked an absolute treat, the beer was much the same, a good old Northumberland bitter, slightly nutty, slightly sweet with a lovely bitter finish, complimenting my home made stottie filled with local smoked bacon, Morrisons “the best” cranberry sauce that had been lurking at the back of the fridge since Christmas and some St Endellion Brie, which is one of my favourite cheeses ever. The only thing missing was the view and the sunshine.

Before you dismiss the sandwich and forget all about, give it a go, after all Mr FABPOW himself  just said on twitter “I personally believe ANYTHING edible works in a sandwich.”

5 comments on “FABPOW – Bacon, Brie and Cranberry Stottie With Bitter”