Beer and food pairing is something many people (including my self) often put a lot of time and effort into, just like those in the wine industry and restaurants. Finding the perfect beer to go with a dish can be a royal pain in the bottom but to be honest most beer will go with most food, It’s just a case of getting the balace right to make it that bit more special. Having said that sometimes the best pairings happen out of the blue. 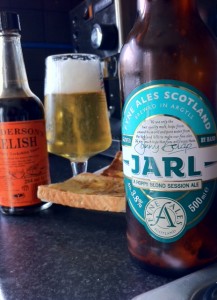 Picture the scene, early Saturday afternoon, The sun is shining, there’s a cool breeze in the air and I’m half way through prepping a 3 course meal for 6 for the evening and in need of some sustenance.  Not wanting something to heavy I grab the  Wensleydale cheese (from our recent trip to the Dales), 2 slices of toast and my ever present bottle of Hendersons Relish (like worcestershire  sauce for our southern readers).

I turn up the grill, stick the bread in the toaster to get it started then crumble the soft creamy cheese over the bread and slide under the red hot element on the grill, it’s just at the right temperature to give me time to nip to the beer cupboard and grab something to drink.

Knowing that it was early afternoon and knowing from experience that strong beer and sharp knives don’t really mix (you can also add deep fat fryers to that list) I needed something that would quench my thirst and not lead to a trip to A & E. As it happens I’d just received the latest installment of the My Brewery Tap 52 week beer club, which I knew contained just the sort of beer I needed, I reached down and grabbed a bottle at random, This bottle was Fyne Ales, Jarl, a light golden ale which was in excellent form at the Great British Beer Festival 2010 and at only 3.8% it was perfect.

Back in the kitchen I could hear the cheese bubbling, I just had time to open the bottle and pour a glass, all be it rather badly, Jarl pours an incredibly pale golden, there’s plenty of zingy grapefruit and zesty lemon pith on the nose.

I grabbed my toast from under the grill splashed on some Hendersons Relish and retired to the sunny spot in the garden.

It was a little thin in the mouth but this didn’t detract form the flavour it packed, the grapefruit and lemon from the nose were there in bagfuls, it was quite tart and bitter, extremely refreshing and as good as I remembered on cask. The finish was dry, slightly malty and then hoppy.

The zing of the beer worked really well with the Wensleydale  cheese, it cut through the creaminess while not obliterating the flavours, the Jarl even stood up to the sticky sweet Hendersons Relish. All too quickly both the beer and the cheese on toast had gone I had a huge smile on my face. This was heaven.

Fyne Jarl is simply one of the best British beers I’ve had, It gets lots of hype and deservedly so, if this was on in a pub on a hot summers day, I would have a very, very hard time leaving.

PS for those of you who don’t know, FABPOW is Dredgie’s term for Food and Beer Pairing of the Week or something along those lines.