Just before Christmas I posted about the Winter warms, pale ales, pork pies and porters festival at The Captain Cook Inn, in Staithes, Emily offered to play chofur provided we were back for her to bring her horse in.

For those of you who don’t know the Captain Cook Inn, It’s a cracking little pub at the top of the bank in Staithes which isn’t far from Whitby, It’s not one of these trendy, upmarket gastro pubs that you tend to find in a lot of places these days, it’s a real pub, a little rough around the edges but lovely and cosy when the fire is on and has a great atmosphere and friendly staff. I’ve never had food their but have heard it’s pretty good and they offer a wide range of meats for Sunday lunch including wild boar, venison and buffalo. 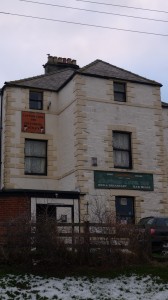 We arrived at the pub just after lunch and there were already quite a few people in there who had made a start on the festival ales, the pub had set up most the beers in the back room all on hand pull, then a few on the main bar at the front, which were also on hand pull, this makes a change from the usually gravity casks you get at most of the festivals in pubs.

Emily’s one and only half of ale was Caledonian, Kiss Me Quick, which she said she enjoyed, for me it was just a little bit bland with only a tiny hint of hop and a little bit of malty sweetness to it.

I started off with an Adnams Old Ale at 4.1% it was packed full of flavour, It was deliciously dark, didn’t really have a head but still smelt quite tasty with hints of malt and caramel on the nose, it had a good body and a lovely roast malty flavour with sweet caramel and hints of hops, very tasty indeed.

Next I wanted to try Wadworth Spearfish or one of the Kelham Island beers but the Spearfish wasn’t on and unfortunately there were no signs of the Kelham Island Beers, so I plumped for Tower, Cooper’s Special, and to accompany it I had my eye on one of the 12 pies from Iloveporkpie.com but they hadn’t arrived yet so we decided to try a couple of the 12 sausages on offer, Emily had sweet chilli and I had an extremely tasty Pepper, coriander and Scottish beef  number. Both the sausages were fantastic, full of meat and with really tasty flavours.

The Cooper’s Special was a lovely copper colour with a decent off white head, it didn’t have much of an aroma but had a rather nice malty tasty and a lovely bitter and sour finnish.

Next up was a Hoskins, Old Navigation which weighed in at a rather hefty 7%, maybe a little bit strong for an afternoon but I didn’t have much time to work my way up to the stronger ones so had to skip straight to them.  I was expecting quite  a lot from this beer as it seemed quite popular with a couple of people in the pub and to be honest I was quite disappointed, there wasn’t a head to speak of and the main aroma was of alcohol and malt, this came through in the flavour too, it was just too the first flavour was the malt but then all you got was booze, booze and more booze, so not a beer I will be having again.

By this point time was almost up but there was one last beer I really wanted to try, Sadler’s, Mud City Stout, it’s one I have seen mentioned in a few places as a top stout so it would have been rude not to have given it a go.

It came out of the pump a lovely dark brown colour with a chestnut colour head, the aromas were of malt and coffee, the mouth feel was pretty good, not too heavy and not to thin, the tastes were of malt, liquorice and coffee with a hint of vanilla, there was no indication that it was 6.6% as it had a rather dry finish and none of the boozy taste that the Old Navigation had.

While we were there we got chatting to one of the regulars, he certainly knew his beer and was a big fan of some of the same breweries as me…judging by the notes in his various beer festival programs that he showed me.

Overall we had a great couple of hours, I have a feeling we will be getting the bus next time so that Emily can have a few beers too, I highly recommend calling in if you are on your way to (or from) Whitby or if you just fancy a day out by the sea!