Flying Dog are one of those breweries you hear a lot about but don’t often see their beers, unless you live near a good bottle shop, or in the case of Doggie Style and Gonzo a rather large Tesco.

I fell in love with Doggie Style (or Classic Pale Ale as Tesco call it) after a walk along the beach to Saltburn for Fish and Chips, (you can read about that here ) so every time I see a new beer from Flying Dog I like to try it. 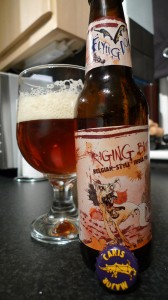 A Raging Bitch in the kitchen

Raging Bitch is another one of those beers, that like Pliny the Elder, you hear a lot about but aren’t ever sure if you will get to try it. Luckily on day 2 of Twissup we visited Zak Avery at Beer Ritz who had a few bottles in stock.

Raging Bitch was brewed to celebrate Flying Dog‘s 20th Anniversary – which spookily is the same day as my birthday – 25th September (everyone make a note of that..) It’s branded as a Belgian-style India Pale Ale and weighs in at 8.3% and around £2+ for a 330ml bottle.

The first thing that strikes you about Raging Bitch is the name, I can’t see Tesco wanting to stock it, not to mention the label that features….a Raging Bitch.

It pours a lovely amber colour with a large frothy head, the aromas are strong and fruity, lots of peach, citrus and bags and bags of floral hops, there’s a hint of the yeast there too.

From the first sip you know this a beer that you want to drink more of, the characters from the smell come over in the beer, it feels lovely on the tongue, creamy, bordering on oily (in a good way) the hops are the most pronounced flavour but you get the yeast and malt combining with the citrus to make a rather delicious .

There is a lovely bitterness and sharpness at the end that really cleanses your palette and leaves you wanting more, If I am honest I didn’t notice it was 8.3% ,a bit like the Pliny the Elder, it seems to hide its ABV really well making it quite dangerous if you have more than one bottle lying around….luckily I had Pliny the Elder as my next beer and I am happy to report that both beers are up there with the best beers I’ve ever had and will definitely be contenders for Beer of the year 2010.

So in short Flying Dog Raging Bitch, lives up to the hype, is dangerously drinkable and a seriously good beer. Zak used the phrase “Terrible name, Great Beer” in his video blog here, he wasn’t wrong. I’m not sure if he has any Raging Bitch left, but if you are near Leeds then it’s worth popping along to find out.