I’ll cut straight to the point, I love Fruli Beer, I’ve been drinking it for as long as I can remember and despite it’s bright pink appearance it seems popular with both sexes, even in the pub up the road that sells it by the pint. It’s brewed near Ghent in Belgium and has won many awards over the years. 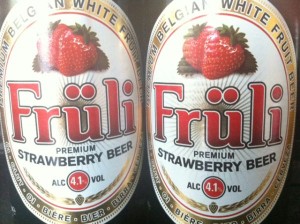 Unlike many fruit beers Fruli  actually tastes and smells of strawberries, in fact the smell reminds me of my child hood, steaming hot rice pudding with a big dollop of strawberry jam on, you know the sweet vanilla and sticky sweet strawberry you get (if you’ve not had it rice pudding this way you really have to try it).

In the mouth its light and refreshing, no where near as sweet as it smells, It really packs in a fresh strawberry flavour, slightly over ripe and just starting to go a little bitter. There’s a hint of buttery pastry in there, the vanilla also comes through before a little bit of bitterness, It always stays just the right side of the sweet and cloying line which means it’s easy to drink by the pint and doesn’t leave you feeling like you’ve just drank a pint of fruit juice.

I’m not sure it’s me but lately i’ve also noticed a slightly tart almost yogurt like after taste to it, it’s not unpleasant but it’s not something I had noticed before and that I quite like.

From what I gather there are a few Fruli fan sites kicking around but you read more about Fruli on their official website here, like them on facebook here or follow them on twitter here, you can even buy it online here.