I write this as I am sat here with a rather large bulbous glass that has a rather small amount of  what is currently the world’s strongest “beer”, Sink The Bismarck, from Brewdog.

My brother bought the bottle a few weeks ago and it arrived a couple of days ago, he offered to bring some round for me to try, in return I had to share something special from my beer cupboard with him. 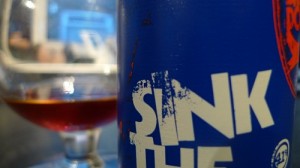 Tonight was the night, he turned up on my doorstep brandishing a rather bright blue and pink bottle that was unmistakably something from Brewdog, unlike the Tactical Nuclear Penguin that I tried a few weeks ago when visiting Woolpack Dave and Ann, it came with a stopper so that you could re seal the bottle after opening it.

I quickly ushered him in and grabbed a couple of glasses from the cupboard, He had already opened it so we popped off the stopper and he poured me a decent amount into the bottom of my Duvel Glass, before he had even finished pouring it I could smell the hops and the alcohol. I’ve never smelt anything quite like it, it was huge, hops, peach and alcohol, nothing else.  The more you smell it the more it burns the inside of your nose, I imagine this is what snorting vodka feels like.

As  I swirled it around the glass it left “legs” on the side more akin to a spirit than a beer, although at 41% it’s actually stronger than most spirits. I took a small sip, and the hops hit me, smacking me round the face, I’ve had some seriously hoppy beer but never anything like this,  At first its sweet, lots of caramel, it burns your lips slightly then as it slides down your throat it starts to burn that too, it has a huge bitter finish with stacks of alcohol, that lasts a good while. 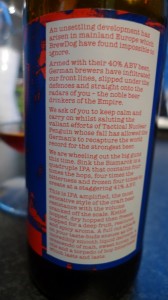 Interesting info on the label

It’s taken me a long time to drink the small glass that I was poured, my brother has since been and gone, as has nearly a full episode of the rather dragged out Masterchef.

My brutally honest opinion on Sink (ignoring the name as I’ve already discussed it with many people and even wrote about it here)  are it’s firstly a very interesting experiment, hopping and freezing a beer to produce something with such a high ABV appeals to my geeky side.

Secondly I don’t think it’s a beer (that’s why I have been using “beer”) it’s too strong, its not something you can’t drink a bottle, half pint or pint of, it’s not something I would order over the bar, if it was more rounded and balanced I would say it has the potential to be an after dinner drink or a nightcap, but at the price it is I would buy a good bottle of whiskey.

It’s certainly made me think about it, I’ve probably not thought about a drink quite so much, maybe this was Brewdog’s plan, but id rather be drinking than thinking and after thinking and drinking Sink I don’t actually wan’t any more beer tonight…odd I know.

I’ve already been asked if I would pay for it, my honest answer is no, I wouldn’t I would rather spend my £40+ on a mix of beers, even a mixed case of Brewdog beers – Basha, Tokyo, Punk, Dogma, Hardcore, all knock this into a cocked hat as far as beer goes.

If you want to buy a bottle then check out the Brewdog website I’m off to cut some more Herefordshire hop cheese and dig out a couple more crackers.