One of the many reasons it’s been a bit quiet on here of late (other than hosting problems) is that this time last week I  was down south for the Great British Beer Festival, I felt slightly under prepared having only briefly glanced at the beer list, decided not to make a list, mainly because GBBF list creation tool was a pain in the arse to use, even just reading the list was a chore. 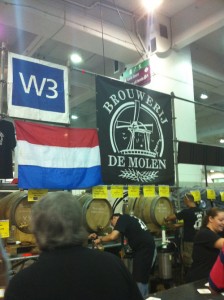 The De Molen Beers in all their glory

It look forever for me to find and add a couple of beer so I soon gave up. Then seeing that other people had made proper lists and even prepared survival kits made me feel even les prepared. Still the main aim of the game was to get to London in one piece, enjoy some good beer in great company.

The train journey was a lot quicker and easier than I first thought and with a little help from twitter I managed to jump straight onto the right tube and be at Ears Court about 4 hours after leaving my house 300miles away. I bumped into Robsterowski followed by Dom from Marble and his better half Janine who brews for Ashover brewery, reassuringly neither Dom nor Janine had a tick list so once inside we headed to the Bires Sans Frontires bar and opted to start the day with a bang, sharing a bottle of Mikkeller Tommohawk IPA, It was big, bold and beautiful, full of lip smacking hops and a great bitterness, although looking back, starting the day with a 6.9% IPA probably wasn’t the best idea in the world.

As the hall started to fill up I bumped into more and more people that I recognised or who recognised me and ques started forming at the bars, It was at this point I decided it would be a good idea to get a couple of bottles to take home with me, My brief look at the beer list before I set off alerted me to Rogue Chipotle Ale so I had to get that along with a couple of others. With the bottles safely stashed and being watched over by whoever was looking after our table at the time it was a good chance to go off and mingle, I bumped into and chatted to loads of great people, bloggers, brewers, media types, company owners and a whole lot more, almost everyone was in a really chipper mood and having a great time.

By this point the beers had been flowing freely, I’d tried a huge range of stuff from the Thornbridge Hopton and Craven Silk, Moor Revival and Fyne Jarl to of all 3 of the Awesome De Molen, not forgetting bucket loads of US beers with the odd Mikkeller thrown in for good measure, it came time for a break and something to eat.

The food stalls were world apart from the reconstituted rubbish you usually get at these sorts of events, it was more like a farmers market than beer festival food stall, you could get everything from big wedges of cheese, buckets of scampi to wild boar pies and ostrich burgers and all at pretty decent prices too. 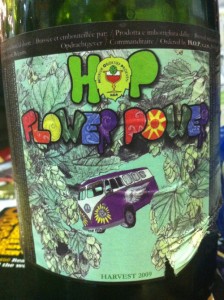 Once my hunger was satisfied with a rather huge steak, horseradish and onion chutney pie It was time to hit the beer again, I decided to go with a couple of the lambic beers, as a way of breaking up the hard hitting hops more than anything. Luckily like most things there was a great selection and I could try lots of them by getting 1/3rds or by sharing a bottle. It was then I spotted a rather cool looking bottle in the fridge, I asked the rather helpful barman what it was and he brought it over, the label read De Ranke HOP Flower Power and had a picture of a rather cool purple camper van on, It was £7.50 for the 750ml bottle but I just had to try it, I persuaded the guy to let me take the bottle over to our table on to share on the premise I returned the empty.

It seemed to go down really well with everyone that tried it and brought about some interesting discussion, especially the rather funky label and crisp clean taste!

Not long after this we were joined by the legendary Tandleman who was clutching a big glass of bright pink Kriek, a sight I will never forget! Not that there is anything wrong with Kriek, I love the stuff. More beer and conversation followed before it was time for him to get back to work on the other side of the bar.

Time flew and it was soon time to leave, we were ushered out of the building and headed for the train. I think we arrived back at Mark’s place around 01:00 where we chatted for a bit and then he very kindly let me sleep on his living room floor,  In all honesty it was the best nights sleep I’ve had in ages and left me ready for a whirlwind trip of London drinking establishments…or so I thought, more on that later in the week.

All in all I really enjoyed GBBF,  It was kind of crazy and spun my head, for the most part it seemed non stop and full on, which also meant I didn’t get many photos and the ones I did take weren’t great. I will definitely be going back next year.

Mark did a post about the good the bad and the ugly so here’s my take. 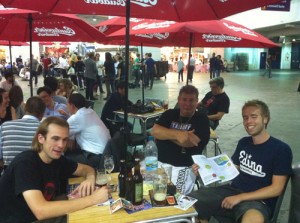 Mark, Tandleman and Mark late in the evening

The good: The range of beer and food was fantastic although there were some top British breweries missing, being able to sell your pint glass back at the end of the day was  a great idea , I kept my 1/3 glass but didn’t really need another pint glass. The general atmosphere was great, a little mental at times but great none the less. The pork scratchings were top notch, I just wish I had brought some home. The swapping of bottles here and there, the receiving of bottles of very generous people.

The bad: The way the beers had been spread out over the different bars just didn’t seem to make sense and made it hard to find some beers. The lack of tables, although I guess when it  got busier the tables would have gotten in the way. The print in the program could have been a bit bigger…it got harder to read as the day went on. The GBBF website needs an overhaul (CAMRA if you are reading this give me a call)  Amager IPA wasn’t a great beer for the money neither was the Revelation Cat Single Hop Lambic.

The ugly: The toilets, the bloke dressed as a woman, he didn’t make a great woman. The fact that London turned my snot black.