Those of you who follow me on Twitter will know just how much shouted about this beer a couple of weeks ago when I was down in Cornwall, those of you who know me know that I’m not easily pleased when it comes to beers and that I don’t often drink more than one of the same pint in a pub, obviously that has a few exceptions and Harbour Light Ale is one of them. 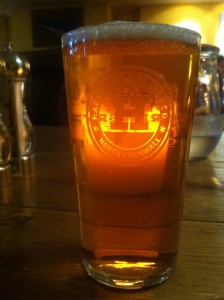 It’s pale golden in colour there’s lots of pineapple and orange peel on the nose, the taste is perfectly balanced, it’s well hopped to the point where you can taste them but they don’t destroy your taste buds, there’s bags of citrus peel and a little bit of peach tied in with a touch of gassiness that mellows the more you drink. The balance makes it really crisp and clean and oh so moreish and refreshing, especially when the other beers on the bar are a lot sweeter and maltier.

The pub it’s self  (The Old Coast Guard) was a pub we didn’t really like the first time we went to Mousehole, this time it seemed more relaxed had a nicer atmosphere and was always full of people (and dogs), we had two fantastic meals in there and I’d argue the beer went with both my fish and pork as well as any wine on the wine list.

All told the beer was good enough for me to keep going back to Old Coast Guard every day for nearly a whole week and to drink more than a couple of pints on each occasion, whether were kicking back in the garden enjoying the view, curled up on the comfy chairs at the end of the bar or in the restaurant eating. It was the perfect beer.

In fact I think it’s so good it’s my favourite sub 4% cask beer in the UK right now!

I can’t recommend it highly enough and I’ve heard a rumour the bottles will be online soon which I can’t wait to try, the other bottled Harbour Beers that I’ve tried have mostly impressed along with their lovely 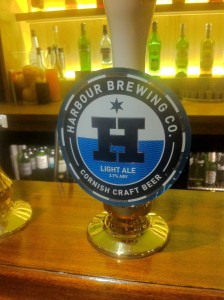 Oh and if you are passing the brewery give them a shout and see if you can pop in, the brew kit is beautiful and something to behold.

You can read a bit more about them here as they filled in my meet the brewer a while back.