Posted on October 19, 2011 by andyMogg in Beer Reviews, Hardknott brewery No Comments

A couple of weeks ago HardknottDave asked me if i wanted to test his soon to be launched online shop, happy to help a mate and with the chance to order a pre release version of his newest bottled beer, I logged on and got stuck in.

Not long after my paypal receipt had arrived I received a DM from Dave saying my beer had been packed and it would be with me on Monday as it was Friday and the couriers didn’t do Saturdays. 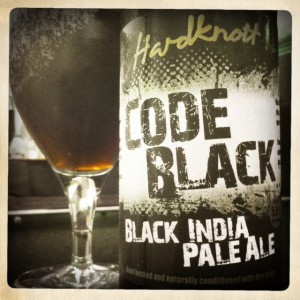 Sure enough when I got in from work there was a parcel waiting for me, 12 bottles of the new Hardknott beer, Code Black, 6 for me and 6 for Dave Lozman (who’s written about it here) It was well packed, surrounded by bubble wrap so thumbs up there.

Despite wanting to crack a bottle open straight away, they were a little bit warm and I’ve learned that beer needs a day or so to settle after its long journey through the mail, so I behaved my self and put them somewhere nice and cool to settle.

After precisely 24 hours I grabbed a couple of bottles and got stuck in. The branding is typically Hardknott so stands out quite well.

Code Black pours a really dark brown, not quite black as the “Black IPA” would have you believe, you could tell the beer was fresh the citrusy, piney hops were really pronounced on the nose, there was a little bit of smoke there too.

In the mouth it was really smooth and had that typically Hardknott characteristic, whether it’s from the special Cumbrian water, the malt Dave uses I don’t know, what I do know is I love it.

Code Black is a cracker of a beer, It’s big and it’s bold, the hops are present from the moment you put it in your mouth and long after you’ve swallowed it. There’s hints of mocha (or chocolate and coffee if you prefer), plenty of fresh pine and a bit of citrus for good measure.  There’s a slightly bitter sweet toasted malt flavour there too, the bitterness from that and the hops lasts long after you’ve swallowed and balances the sweeter side of the beer out quite well and the finish is surprisingly dry.

The blurb says that at 5.6% ABV it’s a bit strong to neck pints of, unfortunately the flavours out weigh this and I think if it was on in the pub or at a beer fest, in cask, keg or bottle I’d end up getting into a lot of trouble.

The shop it’s self  was really simple to use and despite needing  a few tweaks here and there  it’s looking good and you’ll all be able to buy Dave’s beers online sooner rather than later, so keep an eye on the Harknott Website and twitter accounts, if you’d like to know more about Hardknott Beers then check out my reviews and Meet the Brewer which is worth a look purely for the old photo of him)