Hardknott are one of the breweries I have a great fondness for, this stems back to visiting Dave and Ann when they ran the Woolpack inn. It was easy to see how passionate and knowledgable they both are.

Since selling th pub and moving the brewery they have gone from strength to strength, re branding and releasing some excellent new beers such as Dark Energy, Cool Fusion, Queboid  and Infra red. 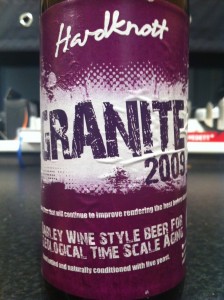 The new and improved label, but i miss the sheep.

Now with the new versions of Aether Blaec and Granite about to be released I thought it was about time I published my thoughts on the previous versions, starting with Granite.

When I first tried Granite it came in the same style bottle but with a white label and hand drawn sheep, not to mention a typeface that I’ll not talk about on here, since the rebranding the label is much better, including the new Hardknottisms as i like to call them, small quotes or statements that go with each beer.

Granite is a 10% ABV barley wine that Dave lovingly crafted, It pours almost jet black with a thin tan head, The aromas were of chocolate and smoked sausage.

The body is huge, it’s thick and silky smooth and slightly oily (in a nice way), the smoke from the aroma comes through, slightly ashy, there’s a lovely roasty almost sweet, caramel malt there’s then a little bit of hop character and bitterness. It hides its 10% ABV quite well, although you still know it’s present, I’m wondering if the aging process will mellow this out or intensify it….I guess I will find out sooner or later.

It’s perfectly suited to being stuck in a dark cupboard and left for a couple of years, I’ve kept a bottle to see how it goes, the new version will be added to those as soon as it’s released.