While I was at The Great British Beer Festival, Dave, otherwise known a HardknottDave very kindly gave me a bottle of his latest brew, Infra Red.

For those of you who aren’t familiar with the Hardknott Brewery, They started off brewing up at the Woolpack Pub in Boot, then Dave and Ann sold the pub and moved the brewery to a bigger premises. As a result they have been able to up the amount of beer that they brew, unfortunately they can’t bottle as much of it as they would like so I was thrilled when Dave handed me a bottle. 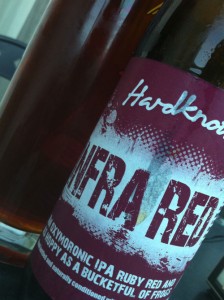 Hoppier than a bucket full of frogs

I first tried Infra Red under a different name when we stayed at the pub, It was un-conditioned but still tasted absolutely fantastic, I think I said then that Dave had a potentially great beer on his hands. Since then the name and the branding has changed so I was hoping the beer wouldn’t have changed too much.

I wasn’t disappointed, as I opened the bottle the aromas burst out of the bottle and filled my nose, as I filled the glass they kept on going, they were flora and fruity with some sweet caramel on the nose.

The head was huge, it was a lot more lively than that glass I had back that the pub, It just goes to show how important conditioning and tweaking are to a brewer.

Flavour wise it was huge, sweet, bready, slightly spicy, citrusy from the hops and ultimately really really drinkable which is important with big beers!!

I’ve seen pictures on twitter of a stein filled with Infra Red – I now really want to try it in a big stein just to see how drinkable it is, not to mention what state I would be in afterwards.

You can read Dave’s blog here or follow him on twitter here, you can also follow Ann on twitter too as I’ve got a feeling she’s has just as important a role at the brewery as Dave does..

Oh and you can also buy some from Beermerchants, be quick though as there’s not many left, you can also read Dave’s meet the brewer here.