Last week Hardknott ran an #OpenTheRhetoric event on twitter where the idea was those with a bottle of their latest beer would open it then  discuss it via twitter.

I was lucky enough to have a bottle so decided to try and pair it with some food and make a proper event of it.

I decided on Smoked Chilli and Fennel Pizza, hoping that the fennel would pair with the Star Anise in the beer and the smoked chilli would just calm the sweetness down and add a nice bit of heat, you can find the  a bit more info about the pizza on my chilli blog here but the basic recipe is below. 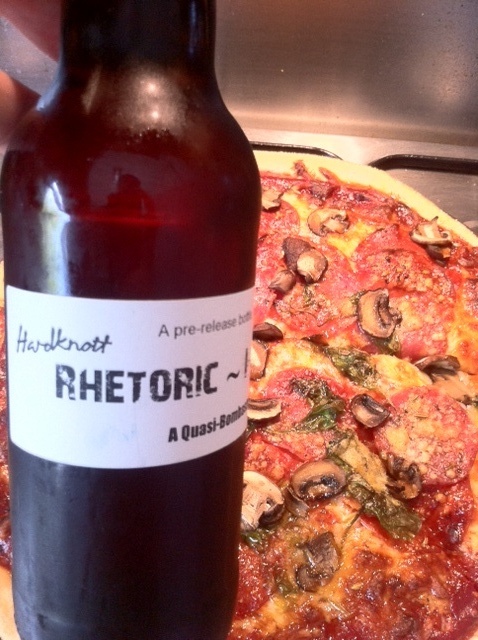 As for the beer…………….. I loved it, it poured a lot lighter than I expected,  a lovely glowing chestnut colour,  on the nose there was lots of clove and liquorice with a hint of booze.

Flavour wise I mainly got a huge hit of liquorice followed by a little bit of sweetness then some clove and maybe a little bit of orange, on it’s own it was a truly delicious beer, although I’m not sure I could have drank more than a bottle of it, it’s certainly a beer I would re visit quite happily.

After the initial liquorice hit I wasn’t sure if the flavours in the pizza would be able to cope but I needn’t have worried, the smoke and the heat from the sauce with just the smallest hint of fennel took the edge off the liquorice….the saltiness of the meat also made an interesting combo too just knocking the sweetness back and turning the beer into a bit of a quaffer.

I’m pretty sure that Hardknott Rhetoric would work well with my favourite Bolognese recipe (which you can find here) but it really was brilliant with the pizza..

And now for the recipe:

For the tomato sauce

You can leave out the chilli if you would like or add some smoked paprika for a little extra twist.

For the Smoked Chilli and Fennel Sauce

To make your pizza

When you are ready to cook your pizza:

beer and food, beer and pizza

4 comments on “Hardknott Rhetoric with Smoked Chilli and Fennel Pizza”