Hawkshead Beer Hall, Visit it or miss out

Posted on November 16, 2011 by andyMogg in Beer Stuff, Hawkshead Brewery No Comments

The day after we’d been to the Cumbrian Beer Appreciation Group’s latest meal was mostly spent wandering around the beautiful Lake District in the rain trying to resit the temptation to go on a huge pub crawl and drink lots of Lakeland Ale, mainly because we had drank lots of beer the night before but also because we were calling in at the new(ish) Hawkshead Beer Hall later in the day to drop some chilli chutney off for @matthawkshead. 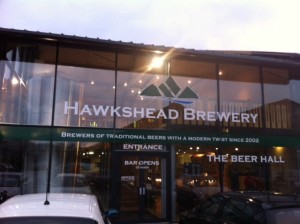 Having never visited the beer hall I wasn’t sure what to expect, I’ve drank loads of Hawkshead beers over the years and I’m a big fan of them, especially Windemere Pale and Hawkshead Red, so as you can Imagine I was like a kid at Christmas when we pulled up in the car park.

The beer hall is in a slightly strange place, being on an industrial estate about 15 minutes from Ambleside, but it’s surrounded by cool shops and businesses like Pogu and the Artisan Bakery but from the outside it certainly looks the part with it’s big glass front giving you a glimpse of the 2 huge tanks full of beer.

Inside the bar is decorated with lots of wood, it’s light and airy and there’s a great atmosphere. The bar it’s self has plenty of hand pulls, a couple of keg lines and a great selection of wine and whisky.

There’s plenty of seating at the bar and around the room, there’s even a dart board in the corner but I couldn’t help but be drawn to the huge window of bottled beers, It contained some pretty awesome brews from the likes of Kernel, Mallinsons, Cantillion etc, which added a nice twist and would make for a great session,  but with the quality and range of the Hawkshead beers I’ll be honest I’d find it hard to pull my self off away from the local brews. 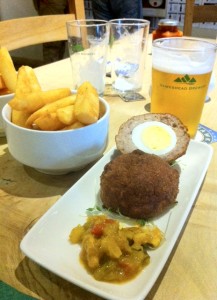 On top of the huge array of drinks there was a great range of food on offer, mostly written on a big board behind the bar so they can cross stuff out when they haven’t got any left, everything that went past us as we wandered around looked delicious and smelt even better, we couldn’t resist I just had to try the Brodies Scotch Egg and Chips and Emily went for the beer battered Fish Goujons and Chips.

The portion sizes were just righ as was the price, everything was spot on and full of flavour, I teamed mine up with the outstanding NZ Pale Ale and Em tried the kegged Lakeland Lager…which she is now hooked on.

Time soon flew and we had to head off home, unfortunately they’d ran out of mini casks of Windemere Pale so I coudln’t take one with me but I did get a a cask of NZ Pale which is even better!

Big thanks to Matt for the guided tour (well worth a go if you visit the beer hall)  and hospitality, very jealous of the view from the office balcony.

Check out the Hawkshead website here and keep an eye out for the next beer festival, it sounds like it will be one not to miss.