Posted on October 17, 2013 by andyMogg in Home Brew Beer No Comments

For my 5th all grain home brew I decided to go back to a nice simple pale ale, not because I didn’t like my Jasmine Green Tea beer, but because I couldn’t decide which of the four versions of the beer I preferred.

Once again I liberated my ingredients from Truefitt Brewery, luckily Matt had just taken delivery of a whole load of hops so I ended up with some Magnum (leaf), Saaz  (leaf) and Willamette (leaf and pellet) which added to the Riwaka (leaf) and Tomahawk (leaf) I had in the fridge from previous brews.

The malt bill was the same as my other four brews, a nice and simple 7kg of pale malt.

For this brew I decided I would use the big plastic boiler that I’d used on AG #4, whilst it’s not as sturdy as the the metal one that I used for my first few brews it’s a fair bit bigger so it means I can get more beer from it.  I also decided that as it was a beautiful day I’d brew outside in the sun which made for a really nice morning and meant I could catch a few rays whilst waiting for things to boil or cool.

I went for my usual 60 min boil, using a little bit of Magnum for bittering at the start, followed by some Saaz and Willamette just before the end, then more Saaz and Willamette with the Riwaka and Tommahawk at flame out which I left to steep for a little while.  As with my other brews I used a packet of US05 yeast which fermented in no time at all, without any issues, which is one of the reasons I’ll keep using it, although I do plan to do some experimenting with yeasts at some point.

The brew was then dry hopped with some Willamette pellets after which it spent a few days in the fridge before being primed and bottled. When bottling I decided to syphon the beer into a clean bucket with my little bottler on the tap in order to try and reduce the amount of trub that got into the bottles and to prevent my tap bunging up again.

Unfortunately I think the sun got to my head and I lost track of what I was doing so I’m not entirely sure on the final stats of the beer as what I scribbled down on my pad as an OG seemed a little low, which may or may not have been correct but I’ve learned my lesson and will make sure I put it straight into my app in future.

The bottles seem to have gone down pretty well with those I’ve given beers to, it could possibly have done with a bit more time to drop bright and definitely done with a little less bitterness but overall I’m pleased with the result especially the aroma as it’s something I’ve struggled with in previous brews.

I’ve already got my 6th brew planned, if that goes well and I manage to nail it I think I will start to experiment a bit more with the malt bill and see how that goes before trying some different yeasts and styles. I’ve got my eye on a couple of new bits of kit, one being a chiller and the other being a bottle tree with washer so if anyone sees a cheap one or has any recommendations do give me a shout. 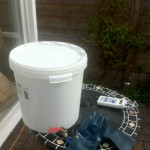 Brewing on the patio in the sun 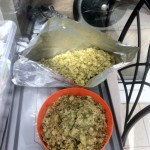 Hops ready for the brew 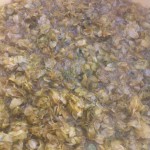 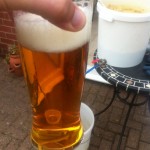 Enjoying AG #1 while the wort transfers 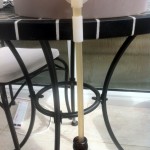 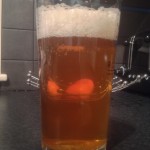 Fist bottle, after a week or so. 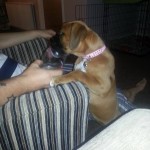