Posted on September 13, 2012 by andyMogg in Beer Stuff 1 Comment

I’ve brewed lots of homebrew kits in the past, you know the ones that come with two tins of extract, you tip it in a bucket, stick some water in and a bit of yeast then leave for a few days and hey presto you have beer, they were always ok but never out standing. I’d always fancied taking it to the next stage and brewing using proper malt and hops but never got round to it.

After y trip to Roosters to brew our wedding beer I knew I just had to give it a go so started pricing up some kit when I remembered that Matt from Truefitt offered to lend me his homebrew boiler and so it began.

Along with the boiler Matt also gave me the ingredients: Some pale malt,  Columbus hops, Cascade hops and some Cluster hop pellets, this meant what ever I was going to brew was going to be pale and hoppy with hopefully the citrus notes from the Columbus and Cascade coming through the most. I decided i’d dry hop it in the fridge for a week and then bottle it, leave the bottles in the house for 2 weeks before moving to the garage.

I set up the boiler in the conservatory, mainly because it was a nice day and I didn’t want to be stuck in the garage but also because it meant I could keep an eye on it a little bit easier.

As it happens I didn’t manage to keep an eye on it as a mate popped round with his newborn baby and I ended up letting my brew boil over…won’t let that happen again as a sticky floor with bits of hop stuck to it isn’t fun to clean.

Other than that most things went to plan, the hardest bit was cooling the brew down so I could pitch the yeast, It seemed to take ages stood in a sink full of ice water, so that’s something i’m going to change for AG#2.

I also wish I’d sparged the malt a little bit more and added more dry hops but again that’s something I can change in AG#2, finally I’d probbaly look at adding some finings to AG#2, the cloudiness didn’t bother me or most of the people I gave bottles to but a couple commented on how it could be a bit clearer.

The final product tastes ok, it’s a long way from perfect although the hops did come through at first they were maybe a little bit yeasty, the bottles seemed hit and miss, a couple seemed a bit funky which I’m guessing is down to them not being quite sterilised.

It’s safe to say I’ve now got the proper home brewing bug and AG#2 will be brewed very soon and a better brewday blog post will accompany it.

PS Thanks to all those who offered support, help and advice so far ;op 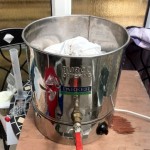 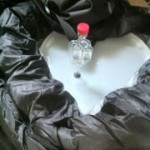 wrapped in an old sleeping bag 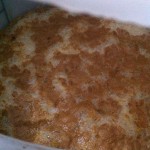 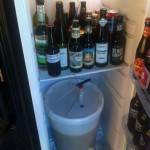 Dry hopping in the fridge 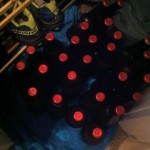 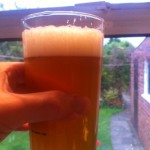 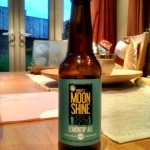 This is what happens when you give your unlabelled homebrew to your business partner who’s a designer.