Homebrew – AG#2 Hop for the Best

Posted on March 26, 2013 by andyMogg in Beer Stuff, Home Brew Beer No Comments

Homebrew AG#2 was brewed what seems like ages ago and has since been supped and shared, I’ve even brewed AG#3 which has been bottled and is currently conditioning somewhere warm.

AG#2 was another pale ale for which I was aiming for 6% ABV and planned to use hops from New Zealand, as with AG#1 it was brewed in the conservatory, much to the wife’s disgust.

The malt bill was simple, a big bag of Pale Malt with a tiny bit of torrefied wheat thrown in. The hops ended up being Cluster, Riwaka and Pacific Gem – 380g in total. All in a big net curtain then put into the hot water and covered for an hour. I quite like the idea of getting a separate mash tun but the net curtain seems to work and also makes for easy cleaning, I’ve since asked the mother in law to turn the curtain into two bags, one for malt and one for hops so will see how that works out later.

The cluster were pellets and went in 60mins from the end to add a little bit of bitterness,  Some of the Riwaka and Pacific Gem went in at 30mins and 15mins from the end then the rest were used to dry hop the beer later on.

The actual brew went pretty smoothly although there was a tiny bit of boil over when I added the Cluster pellets, I also found that using all pellets clogged up the hop filter when I was trying to drain the wort into my fermentation bucket, So  I really need to find a way round that in the future as it took ages to drain the wort off.

I cooled the brew using ice packs and a big bucket of water to stand the FV in, It takes a little bit of time but give’s me chance to clean everything down and tidy up, it would be nice to have a proper chiller but this works and doesn’t cost £40.

Once the wort was down to pitching temperature I sprinkled over the US-05 Yeast, clipped on the lid, wrapped in my old sleeping bag and put in the cupboard to ferment.

It started to ferment quite quick before getting stuck, so I gave it a bit of a shake which seemed to kick things back into action and it was soon time to add the dry hops, which I may have over done a little as I added 100g each of Pacific Gem and Riwaka. I then put the FV in the fridge and left it for a week.

At the end of the week it was time to bottle, the only problem was the dry hops and yeast had combined to form a thicker than usual sludge which was sat well above the tap on my FV, so I decided to syphon the beer into a new clean bucket, prime  and bottle it from that.  I was a little worried about infection at this stage but it seemed to work out OK.

Two weeks later the bottles had conditioned nicely but were still quite hazy, they were tasting good but a little bit too bitter, looking at the app on my phone it worked out at 102.3 IBU with a BU:GU ratio of 1.76 so a little bit unbalanced, but at 5.8% so not too far off what I was aiming for although I knew I’d have to change the bitterness for v3 and try to aim for something a bit more balanced.

The beer was also a little bit thin so I’d like to get a bit more body from my next beer.

The clarity has been improving as the weeks have passed but the freshness I like from then hops has disappeared along with a lot of the Aroma, the beer has had some decent feedback from people who I’ve given it too but still lots of room for improvement. Hopefully v3 will be that bit closer. 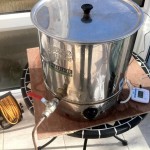 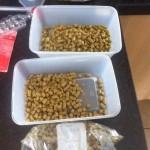 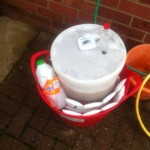 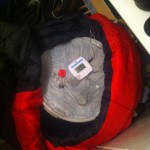 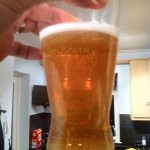