Posted on May 8, 2013 by andyMogg in Beer Stuff, Home Brew Beer 2 Comments

I’m finishing writing this while AG#4 cools which may be a bit alte but I’ve been so busy and really not had the motivation to blog.

Ag#3 was an attempt to improve on my last two pale ales and uses some Dr Rudi hops which I liberated from Truefitt brewery when I helped brew the first version of Truefitt trembler.

The brew day it’s self was probably the best one to date, it went smoothly and I made less mess than the previous times.

The only downside was that I possibly liquored back a but too much so ended up with a beer that was a bit weaker than I was aiming for.

The malt bill was the same as my other brews, using 7kg of pale malt which I put in a big net bag to make cleaning a bit easier.

The wort was then transferred and cooled in a big bucket of water with some freezer packs and frozen bottles of water in and after adding a bit of water I reduced the OG to 1062.

I used US05 yeast again and pitched it at a touch over 20 degrees, fermentation seemed to fly by and was down to 1010 in no time. I had planned to use an aquarium heater to keep it warm but it seemed to do a good enough job on it’s own.

After another raid on the Truefitt hop store I dry hopped it with 20g of each of Riwaka, Pacific gem, Pacifica and Green Bullet and cold conditioned for a week before bottling it.

In total there was 380g of hops used  so I was hoping for a big punch pale ale with plenty of aroma… I wasn’t disappointed although the bottles that I’ve had recently have expectedly lost some of the freshness.

I’ve also been pleased at how well the beer has cleared it’s certainly the clearest beer I’ve made to date. 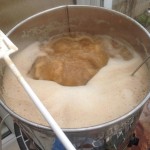 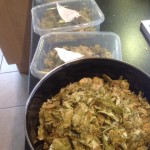 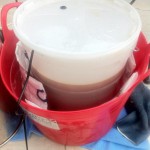 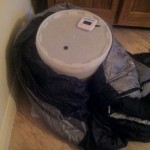 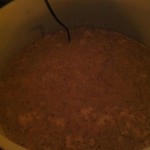 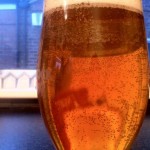 After a week in the glass