Posted on May 28, 2013 by andyMogg in Home Brew Beer No Comments

I hadn’t really planned to start experimenting with flavours until I’d cracked a good solid pale ale but I decided I was pretty pleased with AG#3 Rudi Good and had a yearning to make a beer with Jasmine and Green Tea in it after running out of the delicious Outlaw Mad Hatter.

This required a bit more thought that previous brews as I knew I didn’t want to get too much bitterness from the tea but still needed to get the flavour out and into the beer.

Once again the bulk of the ingredients were liberated from Truefitt Brewery, starting off with about 7kg of 2 row pale malt, some whole leaf Riwaka, Columbus and Willamette hops. I also borrowed a bigger boiler in the hope that I could make a slightly bigger batch of beer meaning that by the time I’d lost beer to yeast and dry hopping I’d still have a decent sized batch to experiment with.

I’d already bought the tea, some Taylors of Harrogate leaf Jasmine Green Tea which I’d picked up from the excellent Shepherds Purse in Whitby, I’d also picked up a couple of new glass demijohn’s and my mother in law had made me a great new grain bag from some net material I got from Boyes, so I asked a few people who might know about putting tea in beer if what I was planning sounded like a decent idea, listened to their advice and I was ready to go.

get a bit more in and compensate for the beer I’d loose to evaporation, yeast and dry hopping. I also decided to treat my water for the first time, I used a campden tablet in the hope that it might help improve the finished beer. I’d also picked up a new thermometer on Ebay for a fraction of its RRP.

The new net bag held the 7kg of malt perfectly with no grains escaping through the closure, the boiler took the malt well along with 20litres of water so there were no issues of water comping over the top, it also gave me plenty of space to turn the bag and move the grains around so I could make sure they were all completely soaked.

As with my previous 3 brews I left the mash for 60 mins before transferring the wort, which was then boiled for 60 minutes.

This is where I made the main change from previous brews by reducing the amount of hops that went in drastically as I didn’t want to obliterate the tea I also decreased the  number of hops that went in early and put the majority of hops in late to try and maximize their flavour and aroma.

Along with the hops that I added at flame out I added some of the green jasmine tea in the hope that there would be enough heat to bring out the tea and jasmine without getting too many tannins into the beer making it too bitter and too dark. This was left for about 20 minutes before being transferred, I checked the gravity and it was a touch high so I added a few litres of water to reduce it and also increase the final yield.

This was then left to cool in my big bucket filled with cold water and ice packs, It does take ages but it seems to work, one day I will get a chiller to speed things up, but at least it meant I could pop into town for a LemonTop ice cream and a couple of new demijohns.

On my return the brew had cooled enough so I pitched a packet of US-05 yeast, covered it up, wrapped it in my old sleeping bag and put it in the corner of the dining room. I was surprised at just how fast it fermented this time taking just less than 4 days. I did stop it a little earlier than I had planned in order to keep a little bit of residual sweetness in the beer and allow for it dropping a bit more in the demijohns.

Bottling was fun as I’d attached my little bottler to my syphoning cane instead of my bucket which worked a treat until the bottler device fell off and I lost a couple of pints on the floor.

I tried all 4 beers after a week in the bottle and was pleased with how different each one tasted as that was the point of the experiment, they will all definitely benefit from another couple of weeks in the bottle but the early signs were promising, the  jasmine green tea came through in all 4 versions the carbonation was getting there, they were also starting to clear nicely.  I preferred one over the others but I’m not saying which until the people I’ve given tasters to have tried them but I think with a few tweaks it would make a great full sized batch.

The stats for this brew:

Colour: 6.6 SRM (although I think it’s darker due to the tea) 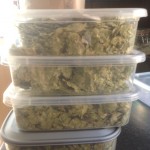 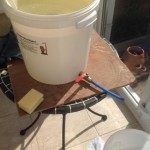 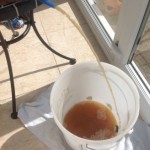 Running off the wort 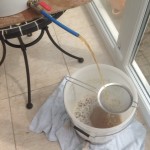 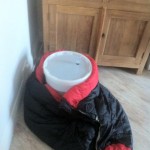 Nice and snug for fermentation 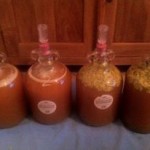 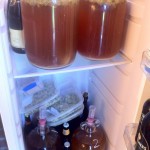 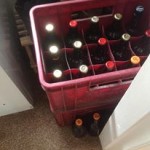 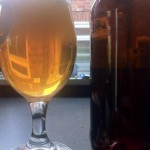 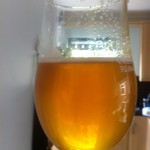 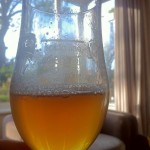 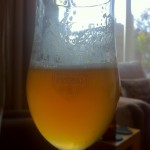 Thanks to @guybigguy for the name.