Hopdaemon’s beers were something I had heard a little bit about, mainly through twitter and the various beer blog’s so when my proper beer swap beers arrived and I opened them up to find that my beer swapper, @petebrissenden brewer at Hopdaemon had included some of his beers along with some other local brews I was over the moon.

The first one I decided to sample was Skirmshander, the reason being is that Pete recommended it was drank with curry, it so happened it was National Curry Week, so I thought it would be rude not to give it a go.

An aromatic copper-coloured pale ale brewed with Kentish Fuggles and Goldings hops for a refreshing taste and a fruity finish.

Deliciously fruity with a dry hoppy finish SKRIMSHANDER is conditioned naturally in the bottle to produce a sparkle and sediment characteristic of all great living beers. 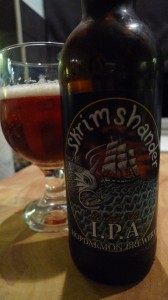 It certainly poured just as it says, a lovely copper colour beer with a pale off white head, the aromas are citrusy, hoppy and grassy with a hint of fruit.

The taste was well balanced, sweet and malty with a hint of toffee, there is a lovely dryness and bitter hop taste combined with the fruit that came thought in the smell, making it a rather tasty beer.

As for Pete’s suggestion of it working well with curry, he was spot on, it went with my slow cooked lamb curry an absolute treat, it certainly complemented the spice and heat in the curry, also at under 5% it  is lighter yet more full of flavour than the the usual lagers that you would choose to pair with a curry.