Those of you that follow me on twitter will know this is the beer I rounded off day 3 of Open It with, It was so good I’ve decided to write about it first and write the other two beers up later.

I picked this bottle up from GBBF 2010 and it’s been sat in the beer cupboard waiting for the right moment, I decided today was that moment, I’d planned in some Crème brûlée’s for after our slow roast pork (with crackling) and I was looking for a beer that would 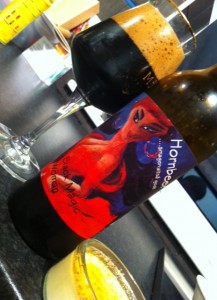 stand up to the sweetness.

I have no idea what the label on the bottle says as it’s all in Danish but I did remember that it was an Imperial stout so thought that should work with the pudding quite well.

Unfortunately my Crème brûlée was a tad on the sweet side and was spoiling the beer a little bit so I decided to scoff it and crack on with the beer separately, and I’m glad I did, this is one seriously, seriously great beer.

Now I know I along with lots of other people am guilty of hyping beers up but this one’s praise is well deserved.

Firstly it looks so amazing in the glass, really really dark with an espresso coloured head, in fact the whole thing looks much like a big glass of the finest espresso known to man.

It smells just like espresso too although with a slightly chocolatey and boozy touch. In the mouth the carbonation is bang on, it wraps around your tongue, cuddling it in a velvety blanket, hiding the 10% ABV like a Harry Potter in an Invisibility cloak (did I really just say that?)

Black Magic Woman is chock full of deep earthy espresso leading into rich dark high cocoa dark chocolate and a little bit of tart sour cherry. There is also a lovely smoked wood characteristic in the finish that lingers in the mouth for a good while after you swallow.

This is one truly amazing beer and possibly the best beer I’ve had this year, although we all know this will change sooner rather than later. Although my love for the label wont end any time soon, it’s definitely a piece of art.

I’m not sure if you can still buy it from anywhere  but if anyone does see it please let me know.