Posted on October 27, 2010 by andyMogg in Twissup 3 Comments

Twissup does Manchester and Huddersfield has been and gone, and what a Twissup it was, probably the biggest and best yet.

The day didn’t start out too well for me as one of my trains was delayed so I missed my connecting train, fortunately it wasn’t long until the next one and it gave me chance to catch up on some more of my book. It also meant that I bumped into Mark from Real Ale Reviews on the train. Once in the Hustle and Bustle of Manchester Station we joined the group that were already there (Including Zak, Yan, Glyn, Mark, Chunk, Kelly and the lovely Catherine) Before long numbers had swollen and there were loads more people that we had expected and not everyone had Arrived at this point. 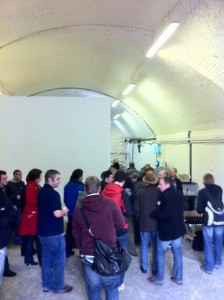 First stop was the Marble Brewery, it wasn’t far from the station, Dom even managed to give us a bit of a guided tour en route, how much of it was true I’m not entirely sure.

On arrival at the new brewery under the arches (built because they out grew the one at the Marble Arch) we were greeted by James and Colin who were in high spirits and handing out glasses of the rather excellent Dobber, (possibly my favourite Marble beer). A few stragglers arrived including Baron Orm who presented some of us with “Twadges”…badges with our twitter avatar on.

We were then shown round the brewery which was informative and fun. I’ve found that after doing so many brewery tours now it’s started to become less about the process and more about the personality, luckily Dom, James and Colin have that in bucket loads.

This was shortly followed by a trip back up the hill to the rather wonderful Marble Arch, I’m not entirely sure they were ready for so many bloggers and drinkers descending on them in one go, but they dealt with it well. There was a great selection of cask ales from Marble plus a guest pump of Hardknott Dave’s Infra red.  By the time I got to the bar a few casks had already been sucked dry, I do remember drinking Dobber, Bitter and trying a few sips of other peoples beers but it was so busy everything blurred into one. There wasn’t really time or space for food but what went past into the dining room looked absolutely delicious, the little loaves of hovis were very cute.

Just before we left Zak pulled out a bottle of Birra Del Borgo that he’d been carrying around in a bag of ice, I can’t remember the exact details but It was an as of yet unreleased beer, It was more like champagne than beer, still pretty tasty though. 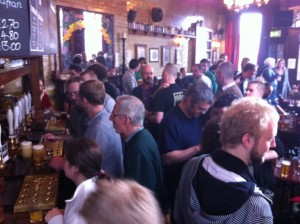 Inside the Marble Arch

Next stop was the Angel which had a great range of beers, I went for something light and hoppy by Pictish I think, I also tried Ola Dubh 30, which if I’m honest, I wasn’t the biggest fan of, I much preferred the younger bottled versions I’d had before, It was just too rich.

Bar Fringe was our next port of call, a cool little bar that really did get a shock when we all piled through the door, by this point I was craving something a little bit different so ended up with a Cantillion Rose de Gambrinus which. tart, tangy and packed full of fruit, just what I needed. All too soon it was time to leave and head for Huddersfield.

On the way I hopped off the train with a few of the others to visit the station bar at Stalybridge, I think I got a pint of Flowers IPA at this point which was quickly necked before jumping on the Train to Huddersfield, Looking back I really should have got a bowl of black peas as i’ve not had them for ages and they would have filled a bit of a hole that the rather pricey pasty I got back in Manchester had failed to fill. 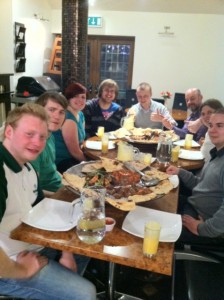 First stop in Huddersfield was one of the bars at the station, The Kings Head, I think, another pint of something pale by Pictish was consumed before we trudged up the road to the Grove. The walk was probably a good thing as I really was starting to feel a little bit squiffy.

The Grove is an aladdin’s cave of cask, kegged and bottled beer so It took a while to decide what to drink, In the end I opted for a half of Moor JJJ IPA, I just cant resist this beer whenever I see it. This was teamed up with some smoked chilli jerky and proved to be the tipping point, from here on in I can’t remember what I drank apart from a few bottles that were shared around including Kernel Stout, Thornbridge Bracia (new batch) and Thornbridge Exposed which were consumed later in the evening.

I do however remember Mark from Real Ale Reviews not being able to handle the chilli jerky and asking for a glass of milk, the barmaid replied with something along the lines of do you think this is a cocktail bar? Hardknott Dave was met with a similar reponse when he asked for a pint of Carling…nice one guys!

We also managed to nip out for a curry between beers, heading for a place which’s name I don’t think I actually ever new, let alone forgot. It however was a curry of epic proportions, It came on a a huge bin lin type thing with an array of kebabs, chops and curries in the middle then naan and chapati round the edge. This was accompanied by some chilli mango lassi that Andy from Summer Wine Brewery had arranged.

Full to bursting and our hands stained with curry we headed back to the grove for a few more beers and to boast of our awesome curry, this prompted a half of the group to leave in search of the same spicy goodness. Leaving us to share the aforementioned bottles of Kernel Stout

The night ended at Mark’s back in Leeds, we shared a bottle and ate some cheese – including some rather yukky caramel cheese which will stick in my mind for a very long time….

…And that was It Twissup day one was over, I had a fantastic time and I really hope everyone else did too…Hopefully some of you will upload some photos somewhere so that we can all have a look.

3 comments on “I Heart Twissup”