Innis and Gunn soon to be available on draught

Posted on December 21, 2010 by andyMogg in Beer News, Innis and Gunn 7 Comments

I’ll always have a soft spot for Innis and Gunn, It was one of the first beers I got into and into in a big way, I used to drink it all of the time, recently I’ve found it a bit sweet so stopped drinking it, a shame really as it was a true gateway beer for me (more on those to come later in the week).

So when I recieved the press release below, I’ll admit I wasn’t as excited as I once would have been, but it’s something that I’m cerntainly going to see if I can find in a pub near me, just to see how it compares to the beer I onced loved. I dare say the beer hasn’t changed it’s just my tastebuds progressing and moving away from sweeter beers.

I know Innis and Gunn have a lot of haters but they also have a huge following and I quite often see people buying in the supermarket so if the draught version has the same effect in pubs and gets people trying beer then it surely has to be a good thing. 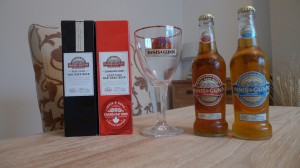 Award-winning independent Scottish brewer Innis & Gunn, is launching Innis & Gunn Original on draught for the first time. This flavourful, iconic beer will be sold in beautiful branded Innis & Gunn glasses in bars and pubs throughout the UK from January 2011.

Innis & Gunn is known for its range of hand-crafted, oak-aged beers in bottle: Innis & Gunn Original, Blonde, Rum Cask, IPA and its limited editions. This is the first time the Original will be available on draught. It will be launched in several outlets in and around Edinburgh pre-Christmas with the official launch taking place next year.

Crawford Sinclair, Innis & Gunn’s UK Director of Sales comments: “Until now Innis & Gunn has only been sold in bottles, however growing demand, particularly in the on-trade has lead to several requests from bar staff for Innis & Gunn Original to be made available on draught. With the growth of interest in Craft beers in bars we feel that the time is right to release this special beer in keg.

“We are very excited about this launch because it brings Innis & Gunn to the front of the bar – prime real estate for brand building – and allows greater numbers of craft beer fans to sample our delicious beer for the first time.”

“We will be providing bar support to help launch the beer on draught, including staff training and provision of Innis & Gunn branded, lined, half-pint glasses. We recommend serving the beer in these specially designed glasses to concentrate the vanilla, malt and toffee aromas for which Innis & Gunn is renowned. We are delighted that consumers can now experience the same complexity of flavour straight from the
tap.”