Those lovely folk over at R & R sent me some info about the new Innis & Gunn Christmas gift packs and offering me a sample,  I had a quick look at the attached PDF and as soon as I saw the words “New Innis & Gunn IPA”, I hit the reply button and very politely accepted their offer of one of the gift packs.

It’s all very nicely boxed, the box is quite sturdy and is packed with info about the beers and Innis  & Gunn, click the pictures below to see bigger versions. 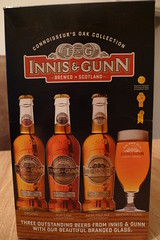 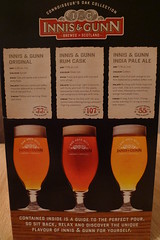 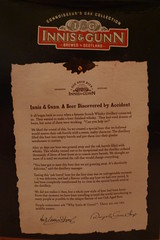 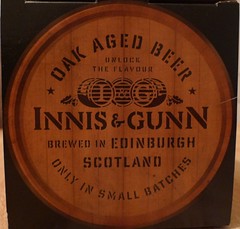 It comes with a handy leaflet telling you how to achieve the “Perfect Pour” something I tried, and have recorded it, you can watch it below, I didn’t quite achieve it despite the rather good instructions, I guess the beer was just a bit too lively.

I drank all of the beers tonight as I thought it would be rude not to, it also gave me chance to compare the 3 beers side by side just like I did in my big Innis & Gunn taste test a few months back. 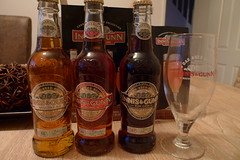 My opinion on the Oak Aged beer and Rum Cask beer hasn’t changed – the Original Oak Aged has a lovely toffee sweet scent with a hint of vanilla, it’s lovely and light for something so strong, The Rum Cask smelled and tasted of Rum, it was sweet and Malty and perfect for this time of year.

Now onto the main attaction, the NEW IPA, The description on the bottle and in the info I was sent said it’s matured for 55 days and weighed in at 7.7% it boasted a beer that was rich with spice, herbal hops, and malt intensity, with subtle vanilla and citrus notes on the finish.

I was expecting something similar to the oak aged ale but with loads more hops, but in truth I didn’t really notice the hops, it was quite sweet, a bit sweeter than the other 2 beers. The first few sips didn’t blow me away, in fact I was a little disappointed, after all I have been drinking some pretty amazing IPA’s of late (Adnams Innovation, Thornbridge Jaipur and Halycon and Crown UIPA to mention a few). I think IPA is one of those terms that will divide opinion, it’s been discussed many times so I wont go into it now.

It pours the same as the other bottles so the consistency is there as you would expect from a brand like Innis & Gunn, it’s quite lively so you get a great head which lasts all the way down the glass. You get lots of interesting aromas, there is definitely a hint of wood, vanilla, caramel and a little bit of spice.

The pack says to chill for 4 hours or more, but I found the flavour improved as the beer warmed up, the sweetness seemed to mellow and enhance the other flavours.

It’s quite a complex beer, it’s fruity, spicy and sweet, the sweetness comes from vanilla and butterscotch flavour, there is also a fairly big bit of citrus in there too.

Although this post may seem a bit negative, it’s not meant to be, I would love to get one of these packs as a present, the IPA is an interesting beer which will divide opinion but I can’t help think I & G have missed a trick, their Canadian Cask is still my favourite and it’s not on general sale in the UK.

If you are an Innis & Gunn fan then it is definitely worth buying. I’m off out to get a couple of packs in Sainsburys for Christmas presents for a couple of mates that love I & G so look forward to their opinions.

Here are a few more images to wet your appetite (click on them to make them bigger.) 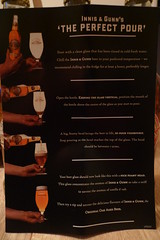