Posted on October 25, 2011 by andyMogg in Beer Reviews, Innis and Gunn 2 Comments

Just like with the excellent Salopian Oracle, I’ve been trying to catch up on some of the beers I’ve been sent lately, the latest of which is from Innis & Gunn.

Innis & Gunn are one of those breweries that divides opinion, some love their beers, others can’t stand them, for me it’s probably the best beer that Innis & Gunn have produced, with the Canadian Cask coming a very close second, although I now find the original Innis & Gunn a little bit too sweet especially if it’s not super cold. 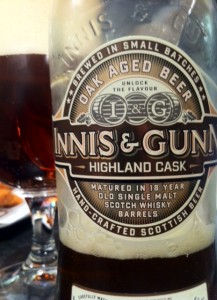 Innis & Gunn Higland Cask  is the the latest in a long line of Innis & Gunn special editions has been matured in oak barrells that were previously used to mature 18 year old single malt Scotch whisky from the Highlands of Scotland.

The beer pours a lovely dark amber colour (nearly as dark as the rum version) with a really thick frothy head. There’s huge sweet vanilla pod on the nose and a little bit of alcohol.

In the mouth it’s unmistakably Innis & Gunn, but it wasn’t as sweet as I expected, it was almost like drinking vanilla fudge with hints of wood, some lemon zest and a little bit of whisky, there was a bit of bitterness at the end balance it out.

Dougal recommends it with, black pudding or haggis, roasted venison or rib of Angus beef,  and apparently cheese lovers will find it a great match for hard goats’ and cows’ cheeses and pickles….. I tend to agree. I’ve got a recipe somewhere for steak soaked in Innis & Gunn which is delicious and I’m quite tempted to try it with this version.

Innis & Gunn Highland Cask Edition comes in an a lovely green box, retails for £2.50 per 330ml bottle and hit the shelves of Sainsburys last week.