Is this the best way to advertise beer?

I recently had an email from a marketing company asking me if I would like a case of beer for my self and a case of beer for one of you lucky readers. All it involved was posting a link to the beer’s website and embedding a teaser video for their latest campaign….Great I thought, that was until i saw the adverts and the video. 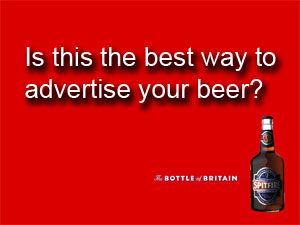 Is this the best way to advertise your beer?

The website in question is Spitfire Ale brewed by Shepherd Neame. While the website is nicely put together and uses lots of nice animation there are some really cool bits to it and it’s generally a really nicely made website that they have obviously spent a few quid on.

Now comes the BUT, this question has been asked and discussed before, is poking fun at the war and Germans really the best way to sell a beer?

Call me a party pooper or an old fart (go on you know you want to), i like a laugh as much as the next guy but, with the exception of one or two of the adverts they are all sailing pretty close to the wind. Is it really necessary to use terms like “No Fokker Comes Close” and “Downed all over Kent just like the Luftwaffe” along with the video showing bottles with with German markings crashing into the sea.

Now while like the recent Brewdog campaign it’s most likely been done with no intention of upsetting anyone and all just for a bit of fun,  I can’t help feel it is a little misguided and the wrong way to go about it,  I mean you wouldn’t bring out a beer and use the current war in Iraq/Afghanistan or one of the many terrorist acts or natural disasters that have happned over the years to promote a beer would you? 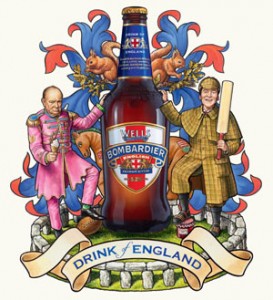 So why do people keep thinking it’s a good idea to sell their beer by poking fun at the war?

Surely there is enough creative talent within marketing agencies and breweries to come up with a less childish and potentially offensive advertising campaign.

I much prefer the positive campaign that Wells Bombardier have gone with, not only are they running a Champion of England competition their advertising, is quirky and clever, choosing to show famous and infamous English people and eccentricities, for me these stand out for the right reasons.

So as you can imagine I gracefully declined the offer of a free case for my self but I realise that some of you reading this will be more interested in the free beer than my feelings on the advertising campaign and it happens Shepherd Neame still want to give one of you lucky readers a case of their Spitfire Ale, all you need to do is send the answer to the following question to  toby@the7thchamber.com.

The question is “Which famous English landmark features in the Bottle of Britain film?”

And while we are on the subject of advertising what are everyone’s favourite/least favourite advertising campaigns by breweries?

17 comments on “Is this the best way to advertise beer?”