I first came across Moor JJJ IPA when I was talking to Phil from Beermerchants, he mentioned he was getting some in and that it was a strong IPA from one of his local breweries, He was pretty excited about being able to sell it on the site, and quite rightly so, it’s not sold in many places and from what I found when having a snoop around the Internet, it is a very highly regarded beer. 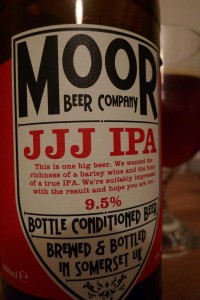 So as soon as it was in stock I had ordered a case of mixed Moor beers, including Merlin’s Magic, Revival, Somerland Gold and of course JJJ IPA.

As you will know if you have read my other Moor reviews I really love their branding, its bold, bright and simple, not only does it look great it feels great too, all the labels with the exception of Fusion (which is on some nice shiny paper) come on a lovely thick, premium paper. The are all in distinctive 65cl bottles too.

JJJ poured a lot darker than I imagined it would, It’s probably closer in colour to a West Coast IIPA than a traditional English IPA, it looked absolutely delicious, the light breaking through the deep golden copper colour and bathing my coffee table in a lovely copper hue.

There are loads of hops and sweet fruits on the nose, the hops are flowery and citrusy, the malt smells sweet and fruity, these are topped up with a nice big hint of booze and a hint of yeast.

The flavour is strong, very strong, yet velvety and smooth, it’s quite sweet but that’s well balanced with the hop bitterness which isn’t huge but you certainly know it’s there. There were all sorts of flavours going on, grassy notes, fruity raisins, zesty grapefruit, this was one big boozy beer, having said that it was really well balanced and incredibly drinkable.

Now fast forward a few months to the the day I got twissed up in Sheffield tap they had a fantastic range of Moor beers on including JJJ, and even though it was still early in the afternoon I just had to try a JJJ on cask, Its 0.5% less ABV than the bottled version and it seemed to be a little bit lighter in colour, although that could have just been me.

The taste was much the same but it was a lot less boozy, slightly lighter, more biscuity and even more drinkable, it really was a top beer, possibly even better on cask than in bottle.