The very kind guys and girls over at R & R recently sent me a bottle of Liefmans Fruit beer, which I in turn gave to my other half as she loves her fruit beers.

Liefmans’ Fruit is a new introduction to the Liefmans range. It is based on older brother Liefmans CuvÃ©e Brut (formerly Liefmans Kriek), a famous brown beer brewed just once a year and left to mature for 18 months on fresh, whole cherries. The new beer is then blended with fresh, natural fruit juices of strawberry, raspberry, cherry, elderberry and bilberry, before being crown-capped. The result is Liefmans Fruit, a highly refreshing fruit beer that is delightfully sweet, with the sparkle of Champagne and the freshness of a nicely chilled glass of wine. 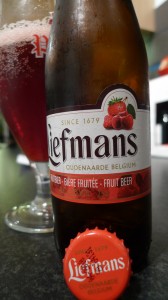 It pours as you would expect a lovely deep red colour which almost glows in the glass, the head was big and frothy but soon disappeared as the beer was drank. There was a lot of sweetness in the aroma with hints of the fruit and a fair bit of a Belgian yeasty smell

Flavour wise it was packed full of fruit, I only manged to pick out a couple of the individual fruits but Emily picked out nearly all of them, the beer was a little bit sweet for me but did have a lovely sharp finish that was quite refreshing.

The carbonation is quite high but this helps make the beer feel light, fresh and drinkable.

Emily didn’t mind the sweetness, she said she could have quite happily drank another bottle or even a bigger bottle, she also said that it went extremely well with the deep, dark, gooey chocolate fondants I had made.
It’s just as well the beer comes in at 99 calories per bottle if you are going to pair it with a decedent pud like that.

If you like fruit beers and Kriek’s then and like them sweet this fruit beer from Leifmans is well worth trying, It’s available from Waitrose stores at costs £1.60 per bottle.