Posted on June 3, 2011 by andyMogg in Beer Reviews, Innis and Gunn 3 Comments

It’s been specially released for Fathers Day on June 19th and is on sale now in Tesco for a very reasonable £2.50 per bottle.

It comes in its own distinctive bright blue box, which if your as cack handed as me makes it easy to wrap. It comes in at 7.2% ABV and has been triple matured then aged for 99 days in Oak casks. 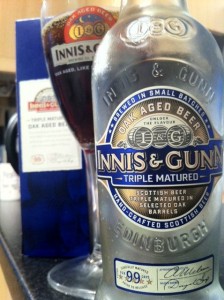 A great addition to any fathers day present.

Unfortunately I broke my latest Innis and Gunn Glass so I had to dig out my old school gold rimmed one, which is cool but a little bit top heavy.

The beer poured a chestnut brown with a lovely deep red tinge with a very thin head.

There’s lots of sweet toffee and brown sugar on the nose with a little bit of woody oak (the press release said a whiff of hops but I didn’t get any of those.)

It’s incredibly smooth in the mouth. there’s not a huge amount of carbonation but it’s not flat either. It tastes quite sweet but not overly sweet, i got quite a lot of roast coffee which I wasn’t expecting and there’s a big vanilla kick too it and a slightly dried fruit cake taste. There’s some definite oak there and a little bit of hop bitterness comes through but not much.

In all honestly It’s a tasty beer, I still prefer the Canadian Cask version but this comes a close second in the Innis and Gunn range for me. I just wish they would get rid of the clear bottles as even though I love the box I’m not a fan of the clear glass at all.