It seems wrong that I’ve not written about Magic Rock beers on here before, especially as I’ve supped an awful lot of them from bottle, cask and even keg.

So I thought it was about time I broke the duck, jumped on the bandwagon and wrote a little bit about them.

Based in Huddersfield, Magic Rock Brewing was founded by Brothers Richard  (of MyBreweryTap fame) and Jonny Burhouse and head brewer Stuart Ross (Ex Crown Brewery) and since launching has gone from strength to strengthen and is now making some stunning beer. 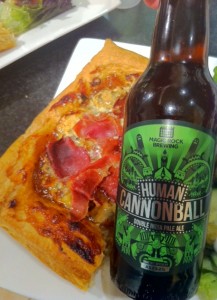 Currently stiting at the top of the pile and the strongest beer in their range (although from what I hear not for long) is Human Cannonball, a 9.2% ABV Double IPA, which I first tried on Keg in Cask Pub & Kitchen after GBBF 2011. I remember being blow away then being very drunk after stupidly trying to cool my mouth down after eating some Naga Bombay Mix. My next encounter was at the Free Trade Inn where it was tasting great again. So when the bottles arrived in the post I could’t wait to try it.

The first couple of bottles disappeared really quickly and I really enjoyed them, It had bottled really well, possibly not quite as big and bold as in keg  but not far off.

The huge tropical fruit aromas were still there, kind of like a melted fruit salad sweet,  lemon, mango and some orange, in the mouth it was huge, slightly sweet, slightly boozy and full of fruit and pine, really really fresh and in your face. The only downside was it lost it’s head a bit to quick, especially compared to the keg verizon.

So by now (if you’re still reading) you are probably wondering how on earth a blue cheese and mango chutney tart comes into it?

A couple of nights ago I had some left over puff pastry in the fridge that needed using when I remembered I’d made this tart a while back, after a quick rumble around in the fridge I found some blue cheese, parma ham and half a jar of mango chutney so knew that when I got in from work that’s what I was making for tea.

I tweeted asking for suggestions on what could stand up to the flavours of the chutney and blue cheese, HardnottDave suggested Queboid, which I’m a big fan of but unfortunately I’d drank my last bottle, fortunately Solebear stepped in and suggested a big hoppy IPA with mango aromas, This is where I immediately remembered Human Cannonball (although Fergus might have been hinting at the excellent Innovation or American Style IPA that he brews but I was fresh out of those too.)

I was hoping the big tropical fruit flavours would compliment the mango and cheese and also be able to stand up to the salt and richness, so there was only one way to find out. So I stuck a bottle in the fridge and got on with making  the tart.

The recipe couldn’t be simpler, Pre heat your oven to 200 degrees, take a sheet of puff pastry, place on some baking paper on a tray, spread the mango chutney over the pastry, leaving a 2cm gap around the edge, sprinkle with crumbled blue cheese and then top with slices of ham. Bake in the oven for 20-30mins until the pastry has risen and turned golden. Serve with salad.

If I’m honest it didn’t really work, I think I’d picked the wrong cheese, the first time when I made the tart it was a lot milder, a lot less pungent and way less salty, as a result everything clashed just a little bit too much. I can’t remember what the cheese was called now but it was one of those really big, really stinky and really sticky blue cheeses.

Im almost certain it would work if I’d used the Yorkshire Blue or some Dolcelatte as they are a bit less mental and a lot milder. I think this particular combination would have suited something darker so the combo was a bit less sickly.

So I put the beer to one side, munched the tart , had a couple of glasses of water and finished the beer off afterwards. In this case both parts were better than their combined sum, sometimes this happens but It won’t put me off trying it again.

If you want to know more then check out their website here, where you can also buy their beers. Follow them on twitter here, here, here and here.