Posted on August 10, 2011 by andyMogg in Beer Reviews, Mallinsons 4 Comments

I’ve been a big fan of Mallinsons ever since a bottle arrived back in one of my My Brewery Tap 52 Week Beer Club cases. Ever since then I’ve tried them both on cask and in bottle when ever I’ve had the chance.

The latest of these beers is number 3 in a series they’ve done called “Hopped”. The series uses the same base ingredients for each beer including a combination of Perle, Cascade, Amarillo hops then each versions is dry hopped with a different hop, in this case Cascade was used. 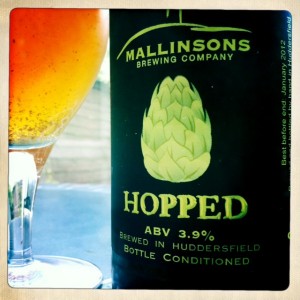 I know Cascade gets a lot of stick but I’m a big fan of it, It makes the perfect post hike beer, especially in beers such as Hardknott Light Cascade and Saltaire’s Cascade. Mainly because it’s used in easy going, thirst quenching beers and provides a nice punchy bitterness that’s refreshing and generally very drinkable.

Mallinsons Hopped #3 shows off the hop perfectly, it pours a lovely orange colour, not perfectly clear as I managed to pour a bit of yeast into the glass, I really should be better at pouring beer by now but In my defence I had just finished cutting the Lawn, trimming the huge hedge in the garden and weeding the vegetable patch.

It had a decent head and nice carbonation, It wasn’t too fizzy and wasn’t too thin although a little bit more body wouldn’t have done any harm, I guess that’s something that’s difficult to get in a sub 4% beer. The aromas were of a little bit of orange.

The flavour was spot on, nicely balanced, Lemons, Clementine and a nice spiceyness, there was plenty of bitterness without being over the top.

I can’t stress how much I liked this beer, It was utterly drinkable and extremely refreshing, If you are reading this and like Lager then you really should order some and give it a go.

You can buy it from My Brewery Tap here