For those of you who’ve not already seen its the marble arch 125 year anniversary this year and to celebrate they’ve got a whole host of events planned, one of which is a beer festival tuning from 1st – 4th August.

As part of this festival they asked 25 people to pick their 5 favourite beers, giving, you’ve guessed it 125 beers in total, well that’s the theory as I’d be surprised If some people hadn’t picked the same beers. These beers would then be served throughout the year. 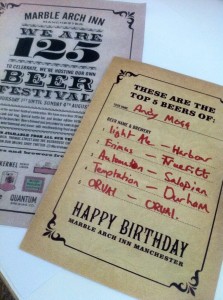 I was one of the lucky 25 who were asked to complete the nifty little post cards and ill tell you now it wasn’t easy, where on earth do you start picking 5 beers? Do they have to easily available? Do they need to cover the huge range of styles around? I wasn’t sure but decided to try and make them as current as possible and easy to get hold off without all being one style. My original list was close to 30 beers, this was soon whittled down by removing the special editions, no longer brewed and hard to acquire bottles, by now it was getting tougher and tougher to decide what to include, did I include a sour beer as I love the style and drink bucket loads of lambic and geuze? Did I include a beer I drink pretty much ever week or one that I’d had once and it blew me away.

In the end I decided to go for beers that had a special place in my heart for different reasons finally arriving at 5 beers, 2 of which were the same style, all of which I’d drank plenty of and all of which should be readily available right now.
So my final 5
1) Harbour – Light Ale – I first encountered this in April sat outside the Old Coast Guard in Mousehole, it’s a proper thirst quencher and proves that lower ABV beers don’t need to lack in flavour, it’s packed full of juicy hops and the bitterness is spot on, it was enough to keep me going back every night for a few pints.
2) Truefitt – Erimus – a new brewery just down the road in Middlesbrough has this one absolutely nailed, similar in style and ABV to Harbour Light Ale, but completely different in flavour, packed with stacks of Riwaka hops its pretty much my go to beer and is often found on cask in my garage or if not I’ve  always got a few bottles in.
3) Salopian –  Automaton this beer genuinely blew me away, I’ve now worked my way through a few bottles and its still as good as ever, The Citra and Saaz really sing to give plenty of tropical fruit flavours without being too crazy.
4) Durham – Temptation – I’ve been a big fan of this beer for a very long time, Durham make some excellent beers and for me this is their crowning glory, so much so it was part of my wedding last year, It’s a huge beer in both ABV, mouthfeel and flavour, not one for the feint of heart.
5) Brasserie d’Orval – Orval, what can I say that hasn’t already been said about this beer, it’s loved by almost everyone and at the time of writing my list Simon Johnson had just passed away.I’d had a few bottles to toast his memory, it was one of his favourites if not his all time favourite, It was his Martini beer and he once claimed if you were sick of Orval you were sick of beer.
So that’s it, my top 5, not my favourites of all time but beers that meant something to me at the time of compiling the list.
Were you one of the other 24 people asked to take part? What did you pick and why?
You can read more about the events by visiting the Marble website