Marble Brewery are one of my favourite UK breweries, they brew some really top draw beer and I’m yet to have one of their beers that I don’t like. I’ve met a few of the guys from the brewery both at twissup and  they always seem really knowledgeable and up for a laugh. 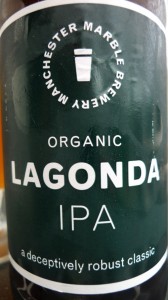 Simple, yet stylish branding from Marble

Marble Lagonda is a 5% “classic style IPA”, it pours a lovely light golden colour, full of life, the head was pretty good, creamy and light. It’s well carbonated, not too fizzy and not too flat.

The aromas are fruity with grapefruit and lemon coming through with a hint of spice, maybe a bit of pineapple.

Taste wise Lagonda isn’t quite up their with Dobber or Manchester Bitter, it’s nicely rounded, with a lovely balance of grassy, piney hops and slightly sweet pale malt, the fruit then really comes through before the hops leave a lovely bitter finish in your mouth.

While it’s not my favourite out of the Marble beers It’s still a great, well brewed, incredibly tasty beer, that will have a regular spot in my beer cupboard for the forseable future, it’s one of those go to beers when you want something with loads of falvour but that’s not going to knock you out after 3 bottles.

Oh and I’m not sure if I have mentioned it before but I love the Marble branding, it’s simple, clean and stands out, it’s also instantly recognisable, it’s a bit of a shame it’s not seen on more supermarket shelves as I think a lot of people would pick it up. All they need now is a new website…

Read Dom’s Meet the Brewer here. Read my thoughts on other Marble beers here, or buy some here from My brewery tap