Marble Vs Summer Wine Battle of the Brewers

What now seems like an age ago I popped down to York on the train, this wasn’t one of my usual jaunts to try and cram as many pubs in as possible it was with the specific intention of spending most if not all of the day at the Slip Inn at what promised to be an excellent day’s drinking as it was the Marble Vs Summer Wine Battle of the Brewers.

The format was simple, 16 beers, 2 brewereies, the one to sell the most/sell out quickest won. The day kicked off at 12 (although we’d already had a few in the Maltings beforehand and as always the Roosters was on top form.) 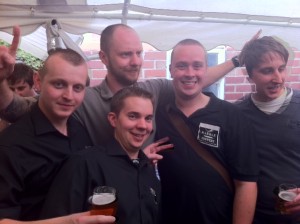 Thanks to  a bit of arm twisting from the Summer Wine Guys I started with their hugely hoppy 7Cs…possibly not the best idea in the world as it was the strongest beer on the menu at 7% and contains 7 big hops that start with, you’ve guessed it C. It was huge, really bitter and full of pine and citrus!! It’s a beer I am a big fan of but It obliterated my palate for at least 10 minutes.

After this I continued to work my way up the Summer Wine List the other hi lights being the always excellent creamy chocolate and coffee enhanced Barista Stout which I can’t wait until they bottle as this will be one for my Christmas morning tradition of coffee beer, and Valencia which tasted of fresh mango and was so refreshing. Once I had rather drunkenly worked my way through all 8 Summer Wine Beers I started at the bottom of the Marble list and worked my way up.

Ginger 6 was fab, an amped up version of their normal ginger beer, really firey and spicy with a subtle undertone of clove. Chocolate was also in good nick and really roasty and chocolatey. The other hi light of the Marble selection was the on of my all time favourite Marble beers, Pint unfortunately on the journey up the list to pint I had to navigate Lagonda and Bitter, both of which I’ve previously enjoyed but on the day there was just something not quite right with either of them, it may have been the heat or I may have been something else I don’t know but it was a shame as they are usually very tasty beers.

In the day I think the Summer Wine beers won for me, they just had a little bit more about them and were all in top nick, even when they started to warm up towards the end of the day…which is why some of us a little detour across to Pivni  via the Swan for a few more beers before heading for the train.

It was great to see so many people there including a few new faces, the BBQ was a welcome addition for much needed lining of stomachs, A big thanks to everyone involved It was a fab day, I hope it wasn’t a one off and that the Slip do it again soon. You can see more pics on the Summer Wine Blog here on or the Beer Prole blog here.