This post has been sat here waiting to be completed for quite some time now but I recently found a bottle of Cornish IPA at the back of the beer cupboard, which as it happened needed drinking and in turn prompted me to finish this blog post.

I first came across Cornish IPA when I popped into Marks and Spencer for their 2 dine for £10 offer, I then re discovered it for 1/3 of the price in our local Bargain Mandess shop a few weeks later which was a stroke of luck. 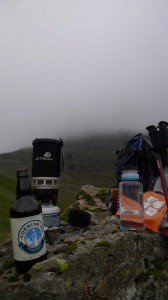 Cornish IPA is brewed by St Austell Brewery who are best known for their Tribute and Proper Job ales. It is brewed with local spring water and locally grown barley.

It weighs in at 5% ABV and pours a lovely copper, almost orange colour, although the first time I drank it I could’t really see the colour as I was drinking it from my titanium mug, outside my tent, near a tarn high up in the mountains of the Lake District.

However I could notice the aromas, it smelled fantastic, citrusy, hoppy and slightly grassy, just what I wanted after a long hard day in the hills.

Flavour wise it was light, crisp and refreshing, there was a fair bit of malt followed by the grapefruit and citrus from the nose and then a lovely bitter hoppy finish which mellowed into hops mixed with caramel.

Not only did it put a big smile on my face it went perfectly with my Expedition Foods, freeze dried spicy bolognese which was also surprisingly tasty and packed full of all the nutrients you need when out and about.

Finding Cornish IPA in Bargain Madness also put a big smile on my face and I promptly bought all they had left on the shelf, it was a lot cheaper than Marks and Spencer and still had a few months left on the BBE date. Having said that I honestly do think it is worth the Marks and Spencer price as I thought it was a very tasty ale as did my camping companions.