Posted on August 26, 2010 by andyMogg in Meet The Brewer, York Brewery 2 Comments

What is your brewery capacity?
We have a 20 bbl brewlength with 180 bbls fermenting capacity or 9 brews per week

What is different about your brewery?
We are situated within the City Walls of York and are geared up to do brewery tours of which we have 4 scheduled tours daily, plus the ability to do group tours or functions on a night. 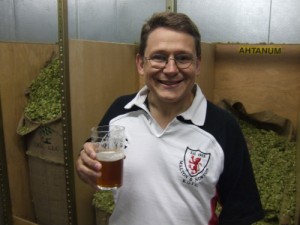 How long have you been brewing for?
I started brewing in 1993, so nearly 20 years!

How did you get into brewing?
I was a design draughtsman and I got made redundant twice in 3 years in the recession of the early nineties and I played rugby with a lad who’s parents ran a pub who started to brew beer for the pub. I enjoyed drinking beer and had done a bit of homebrew so pestered him to give me a job and the rest as they say is history!

What beers do you brew regularly?
We do 4 permanent beers, Guzzler, Constantine, Yorkshire Terrier, and Centurions Ghost Ale.

What special/seasonal beers do you brew?
We usually do at least one seasonal beer per month. The list is too long to go into here.

Where do you think the future of brewing lies?
With the slight growth in cask ales, I hope that the future lies with the smaller craft brewers brewing quality products. Obviously we can’t compete with the supermarkets but as the pub offers something different to take home trade we are in a prime position to take advantage of it.

What is you proudest moment in brewing?
Winning the gold medal and champion beer for Centurions Ghost Ale at the Brewing Industry International Awards. It beat 98 other dark beers and stouts, including that famous black one from Dublin!

Do you have any brewing regrets?
No point having regrets, just look to the future.

What is your brewing ambition?
To carry on making quality beers that people enjoy. The best compliment we as brewers can get is when somebody orders a second one of one of your brands.

What was last beer you drank?
One of our seasonal beers, York Blonde.

What is your favourite hop?
Bramling Cross, which is an English variety. Has a blackcurrant nose and works wonderfully in beer.

Do you have a Brewing hero/inspiration?
I don’t really have any heros as such but there are people in the industry who I respect such as Roger Ryman for what he as accomplished at St. Austell brewery, John Bryan for always pushing the boundaries with the beers he makes. Again too many people to mention really.

Which beer do you wish you had brewed?
We already brew them!