This week sees the return of Meet The Brewer with Andy from Redemption Brewing, Andy and Redemption are new(ish) onto the beer scene but i have heard some very good things about their beer and they are part of the London Brewers Alliance so are definately one to watch.

What is your brewery capacity?
12 Barrel brewplant with 36 Barrel fermenting capacity 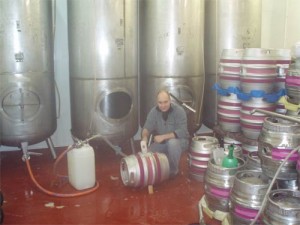 What is different about your brewery?
We are based in North London, 5 min walk from Spurs and all our power comes from a renewable energy company

How long have you been brewing for?
6 months

How did you get into brewing?
From previous homebrewing and a love of good beer

What beers do you brew regularly?
Redemption Pale Ale, a 3.8% session bitter and Urban Dusk a 4.6% premium bitter

What special/seasonal beers do you brew?
None yet, but planning to do some

Where do you think the future of brewing lies?
I hope it’s with smaller producers brewing an eclectic range of beers.

What is you proudest moment in brewing?
The first time someone in a pub told me they really enjoyed my beer.

Do you have any brewing regrets?
Painting the brewery floor with red brick paint!

What is your brewing ambition?
Produce consistently great beers and become an important part of the community in North London. I think it’s great when people have a real allegiance to their local brewery.

What is your favourite hop?
Tough question – at the moment I would say WGV

Do you have a Brewing hero/inspiration?
Reading San Calagione’s Brewing Up a Business helped inspire me to start a brewery.

Which beer do you wish you had brewed?
Hophead

If you could have one superhero superpower what would it be?
The ability to identify ever single flavour I taste

Do you have a website/twitter/blog?
www.redemptionbrewing.co.uk which should be properly up and running by September and we twitter as RedemptionBrew

One comment on “Meet The Brewer – Andy Moffat (Redemption Brewing)”