Posted on October 28, 2010 by andyMogg in Bob’s Brewing Co, Meet The Brewer No Comments

This week’s Meet the Brewer comes from someone who comes highly recomended from a few people who I’ve spoken to.

What is your brewery capacity?
We are theoretically capable of c. 900 brl p.a but currently running at around 750, which we are comfortable with as I don’t like sending â€˜green’ beer out or rushing fermentation to meet deadlines 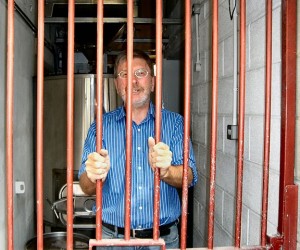 What is different about your brewery?
We don’t brew beers aimed at the â€˜ticker’ market, we do specials if I fancy trialing a different hop or have inspiration for a beer name, but 80% of sales are for our mainstream 4.3% White Lion

How long have you been brewing for?
12 or 13 years, I did some brews when I was involved in Ossett Brewery, and then by myself when I set up Red Lion Ales in 2002 in Ossett.

How did you get into brewing?
By setting up Ossett Brewery in 1997 with a partner, although I was involved in the industry in the early eighties when I was a rep for a beer dispense manufacturer.

What beers do you brew regularly?
White Lion and Chardonnayle

What special/seasonal beers do you brew?
We have a stable of old favourites which we repeat once or twice a year i.e Yakima/Silver Bullet/Golden Harvest/Love Potion/Super Chief (next)

Where do you think the future of brewing lies?
I am concerned that there are too many new brewery startups, but optimistic that the dreadful â€˜Pubco’s’ are having to flog off pubs, some of which are coming into private hands and stocking cask beers, so the market is slowly being liberalized as a result of the ridiculous amount of debts taken on by these companies, so in the end, it will hopefully work out for the better so far as small brewers are concerned. 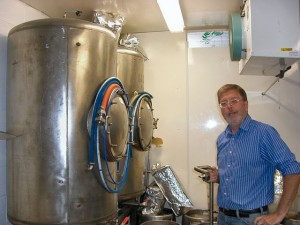 Bob and his conditioning tanks

What is you proudest moment in brewing?
Not having any beer returned (so far !) in 8 years.

Do you have any brewing regrets?
Yes : not having the courage to start up on my own in 1997 instead of a partnership.

What is your brewing ambition?
I would like to see our flagship beer achieve greater acclaim .

What was last beer you drank?
Chardonnayle, I had a right good session at the weekend, I like to do that once a week.

What is your favourite hop?
No single hop but a few favourites , Cascade/Hallertau Brewers Gold/Centennial/ NZ Rakau, and E.Kent Goldings in a good year, which is sadly rare.

Do you have a Brewing hero/inspiration?
No : I used to have but so many brewers have â€˜sold out’ and gone way too commercial for me, it seems that once they win big awards it’s like the kiss of death for the beer concerned.

If you could brew one collaboration beer with someone who would it be with and what would it be?
Well, although I have a name for pale beers, I have always enjoyed strong dark old ales at 6 : 7%, and as we do a bit of trade together and have a similar outlook, I would nominate Brown Cow Brewery near Selby.

Which beer do you wish you had brewed?
Taylors Landlord how it used to be 20 years ago, I had a pub, and we could sell 2 x 36’s on a good day.

How do you spend your time when you aren’t brewing?
I haven’t brewed since a stroke 5 years ago, Andrew Temporal runs the show now. I’m OK but as I’ve just got my bus pass this year, I’m really not up to the physical side except a bit of delivery, as I enjoy meeting customers. Also, I’m rather tied up with renovation of my cottage.

If you could have one superhero superpower what would it be?
That’s two different things, do you mean as in American comics ? I only read the Beano and Railway World when I was a lad.

Do you have a website/twitter/blog?
Certainly not ! we just get on doing what we do : quietly.

Anything else you want to tell us?
I like steam trains and curry, and don’t get married.

Thanks to Bob for filling this in, If you see his ales please give them a go and let me know what you think.