Posted on June 3, 2010 by andyMogg in Breweries & Pubs, Meet The Brewer, Wadworth and Co 3 Comments

After a brief break in our Meet the brewer series, due to lots of busy brewers, we caught up with Brian Yorston from Wadworth and Co Ltd so here is what he had to say:

What is different about your brewery?
All breweries are unique, this brewery no exception to this. It is still housed in the Victorian Tower brewery which dominates the north end of Devizes. It is a mixture of traditional brewing with state of the art equipment with a very experienced brewing team as support. We are proud of still having traditional skills such as coopering, sign-writting and the last full time horse drawn drays. We work for a family lead company which gives good and healthy work values to us all. 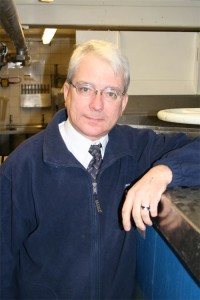 Brian Yorston of Wadworth and Co

How long have you been brewing for?
Just over 30 years. I started at Caledonian Brewery in Edinburgh then to Vaux in Sunderland. After that I brewed at Ushers of Trowbridge, Shepherd-Neame then ended up here in Devizes.

How did you get into brewing?
I gained an honours degree in Brewing and Biochemistry at Heriot- Watt University back in 1979. With that type of degree a brewing career
was inevitable. Prior to that I dabbled in home brewing.

What beers do you brew regularly?
The famous 6X of course but the range includes Henry’s IPA, Bishops Tipple, Horizon, and Strong in the Arm.

What special/seasonal beers do you brew?
These are extensive and number dozens. The Wadworth seasonal beers are Old Timer in December. St George and the Dragon at
Easter. September brings the unique green hop brew Malt ‘n’ Hops. Other beers include Farmer’s Glory, Pint Size Mild, JcB, and the innovative beers of Lily the Pink and Swordfish.

Where do you think the future of brewing lies?
Very Difficult question to answer – the last 30 years have been interesting to say the least and I can not see the future being any less interesting. Small scale brewing will still be around with the successful ones growing in size. The future of the pub is the major issue and the pub will have to evolve to meet future needs. The alcohol and health issue will always be with us and we need as an industry to encourage moderation. Because of
this I see the future of good traditional ales being in the forefront of encouraging people to drink quality beers in moderation. But there again I see Sunderland AFC winning the European Cup so I could be wrong.

What is you proudest moment in brewing?
Shepherd-Neame won the supreme beer at the International Brewing awards in 2002 for Oranjeboom Lager. We also picked up medals
for Hurlimann and Kingfisher at the same awards. Being at the presentation awards made a great day. Thanks to Vaux Breweries I was awarded an MBA – which was presented to me by Peter Ustinov at Durham Castle. That was a proud moment.

What was last beer you drank?
Henry’s IPA, my favourite lunch time tipple.

What is your favourite hop?
It has to be the Fuggle. It is not just a great name but it has been around for such a long time and has spawned so many other hops. It is THE hop of the English ale.

What is your brewing ambition?
To ensure Wadworth are in the best of positions to weather the coming years and to pass on my stewardship as head brewer to my successor with the brewery successful.

Do you have a Brewing hero/inspiration?
I have worked and known many brewers over the years and I hope have learned from their good and bad points. It would be unfair
to single any one out but if I had to pick one person it would be Geoff Palmer the former professor of brewing at Heriot-Watt. His knowledge and enthusiasm was awe inspiring and one I would never match.

Which beer do you wish you had brewed?
Banks Beer – no not the one brewed in Wolverhampton but one brewed in Barbados. It’s the thought of the warm Caribbean
weather which appeals to me whilst stuck in a poorly insulated Victorian office on a cold and foggy December day

What is your favourite hobby outside of brewing?
I enjoy reading and tending to my garden.

Thanks to Brian for taking time out to fill this in, I know how busy everyone in the brewing industry seems to be right now.