Posted on January 20, 2010 by andyMogg in Meet The Brewer No Comments

It’s that time of the week again where it’s time to meet a new brewer, this time It is Chris from Ilkley Brewery in Yorkshire, they make some cracking (and award winning) beers so if you see them anywhere, give them a go. So over to Chris.. 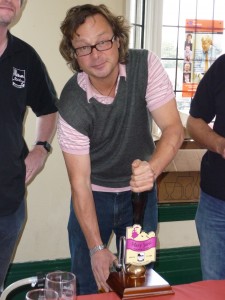 Hugh Fearnley Whittingstall on the pull

What is different about your brewery?
We aim to make traditional beers but with a modern twist using high quantities of hops from all over the world and as we produce on a relatively small scale can be very creative with our beer designs

How long have you been brewing for?
The first batch was made in May 2009 so not long

How did you get into brewing?
We ran the Ilkley Beer Festival so beer was in the blood so to speak. Both directors are keen beer lovers and wanted to see if we could produce beers as good as the other microbreweries that produce our favourite beers.

What special/seasonal beers do you brew?
Currently Ilkley Black, a rich and satisfying Dark Mild at 3.7% and Lotus IPA which is a strong traditional India Pale Ale at 5.6%

Where do you think the future of brewing lies?
In hand crafted high quality beers and ales produced with passion by microbreweries

What is you proudest moment in brewing?
Winning the SIBA gold medal for Mary Jane – we were overwhelmed to have got such an award after only 6 months brewing.

What is your favourite hop?
Amarillo – loads of grapefruit and citrus

What is your brewing ambition?
produce great beers and hopefully one day win the Great British Beer Festival

Do you have a Brewing hero/inspiration?
Not really, we take our inspiration from all the great beers produced up and down the country

Which beer do you wish you had brewed?
Jaipur by Thornbridge

Favourite hobby outside of brewing?
Cycling both on and off road

Anything else you want to tell us?
No except thanks to everyone who has supported us in the first 6 months and I hope you keep drinking and enjoying our beers.