Posted on March 24, 2011 by andyMogg in Marble Brewery, Meet The Brewer No Comments

This weeks Meet The Brewer, comes from Colin at Marble, he’s the second brewer from Marble Brewery to take part, although Dom now brewing at Thornbridge.

What is your Brewery name and where did it come from?
It’s the Marble Brewery in Manchester. It was named after the Marble Arch pub where it’s based.

What is your brewery capacity?
We’ve got two kits at the moment, expanding just over a year ago to try and keep up with demand. The one at the Marble is 5 bbl (at a stretch) and the newer kit in the arch is 12 bbl. 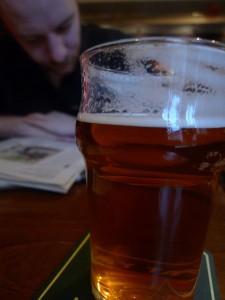 What is different about your brewery?
The two kits, two sites thing is a bit of an oddity, but I guess we’re best known because we’ve always tried to push our beer ideas as far as they can go.

How long have you been brewing for?
I’ve been with the Marble for eight years now and ran Liverpool Brewing Company for three years before that.

How did  you get into brewing?
A happy accident! I had just left university and was working at a brewpub in Liverpool. The brewer was looking to move on and they asked me if I wanted to fill in. After one brew I was hooked and never looked back.

What special/seasonal beers do you brew?
McKenna’s Reprise Porter, Summer Marble, 2 milds one at 3.6%, one at 6%, Decadence: our imperial stout which we brew every other year, Stronge Tawny, Special: where we choose a different beer style every year and release it as our crimbo beer, Vuur & Vlam (thank you Menno! ) Port Stout, Stouter Port Stout, Beer 57, probably some others I’m forgetting.

Where do you think the future of brewing lies?
It seems that everyone with a liking for hops and malt are dabbling with homebrew or even opening their own breweries at the moment and that can only be a good thing for the micro end of the scene. People seem to be sickening of mega-macro produced same-old-bull that they’ve drank for years and are developing the desire to seek out the great and good of what the world has to offer and hopefully the micro brewery will become the macro of the future, forcing quality to to be the watch word of all breweries.

Do you bottle/keg/cask your beer?
About 85% of what we make goes in cask and about 15% in bottles but we’re planning to do some more experiments with kegging this year after one succesful attempt with Dobber last year, thanks to MyBreweryTap. 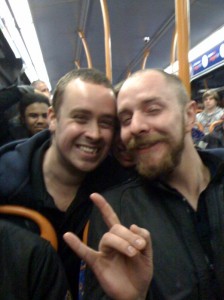 Dom and Colin up late at Twissup

What is you proudest moment in brewing?
I think getting an invite to the Borefts Beer Festival last year was a big one. Just the list of brewers involved sent a tremble through the system and to be on that list really gave all of us at the brewery a real joy. I still can’t believe it happened!

Do you have any brewing regrets?
No regrets. Some of the best beers started out with a different final destination intended. Everything is a lesson so even the muck-ups taught me something more about beers and brewing.

What is your brewing ambition?
To put great beer where there is none at the moment. There are so many places where drinking is largely in the culture but people are still drinking the same old crap that daddy and grandpa supped, with no consideration for the amazing bill of flavours that are out there just waiting to be discovered. That has got to change! There are awesome beers and flavours out there that can change peoples perception of what beer is and I mean to show people that.

What was last beer you drank?
Not exactly the last but I did sample some of this years Vuur & Vlam when racking it last night. It accidentally fell into my glass you see and I thought it’d be rude to throw it away! Should be a stonker.

What is your favourite hop and why?
I’ve got a bit of an obsession with Simcoe at the moment. That rich, wooded red berry flavour works so well in so many beer styles. From 16.4% dry hopped Ijsbock from De Molen to 6.5% IPA from Dark Star and our own Utility IPA brewed with Joe from Whim, it works so well alone or blended with other hops.

What is your favourite beer/food combo?
The best I’ve had recently was a sirloin steak with hand made chips, salad and bearnaise sauce with a two year old bottle of Chimay Blue. Classic flavours that work so well.

Do you have a Brewing hero/inspiration?
I don’t like hero worship as such but there are many people who have changed the way I brew or changed my ideas about what beer can be with their wonderful beers or simply their enthusiasm. I wouldn’t know who to begin with, but honourable mentions to Steven McCormack, Menno Olivier, Mitch Steele, Mikkel Borg Bjergso who are a few I have met along the way. I guess the biggest influence on my brewing would be my time at the Marble with Dom and James.

If you could brew one collaboration beer with someone who would it be with and what would it be?
Maybe an Imperial Stout with the guys at NÃ¤rke Kulturbryggeri. I love their beers so much and their Kaggen Stormaktsporter is one of my all time favourites. I’ve been lucky enough to meet Hage and his family at the Borefts Festival last year and I’d love any excuse to get over there and maybe sneak a look in their recipe book!

Which beer do you wish you had brewed?
This is such a difficult question. There are so many amazing beers that have changed the world of bber. Maybe the first West Coast IPA, the first Imperial Stout, the first light German Pilsner, something which changed peoples minds and just to feel that pride that you have truly done something new.

How do you spend your time when you aren’t brewing?
Beer festivals, beer travel, beer books, a little rugby (watching, bad knees you see) some metal and punk gigs, mostly more beer. Currently re-digesting ‘Brewing’ By Lewis and Young.

Do you have a website/twitter/blog?
You can catch me @MarbleBrewerCol on Twitter or see our brewery thoughts on our facebook group The Marble Brewery, Manchester. Oh, and after MANY years of talk our website should FINALLY be online soon. See it (I hope(!)) at marblebeers.com

Anything else you want to tell us?
A massive thank you to the beer drinkers, nuts, nerds and well wishers who have made all the time at the brewery enormously enjoyable and rewarding.