Posted on July 9, 2014 by andyMogg in Dragonfly Brewery, Meet The Brewer No Comments 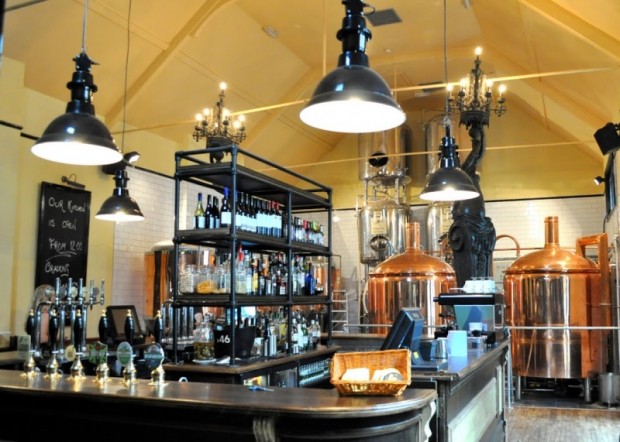 What is your brewery capacity?
1300 litre/10 Barrel

What is different about your brewery?
Part of a brewpub

How long have you been brewing for?
2 years in production, 5 years amateur.

How did you get into brewing?
Interest in craft beer developed into experimenting with homebrewing. After finishing my first degree I then attended Heriot Watt’s MSc in Brewing and Distilling and shortly afterwards landed my first brewing job.

Where do you think the future of brewing lies?
An increasing range on offer from smaller breweries focusing on a local  market. I think we are certainly over the hump of massively hopped beers and have been seeing a lot of experimentation with new ingredients and maturation techniques (barrel ageing and souring). There is no end in sight to this and the possibilities are endless.

Do you bottle/keg/cask your beer?
Mostly keg and cask with some very limited bottles for our secret menu.

What is you proudest moment in brewing?
Winning Supreme Champion in Keg for my Oatmeal Stout and SIBAs beerx in 2013.

I was working in a new brewpub producing only 400 litres pre brew at the time  and we were up against some serious, well established competition so it gave  me a lot to talk about in terms of the quality coming out of both brewpubs, small breweries and the new wave of breweries.

Do you have any brewing regrets?
None, any mistakes are part of the learning process.

What is your brewing ambition?
At the moment I’m just focusing on getting everything right at Dragonfly Brewery.

What was last beer you drank?
Boon Gueze

What is your favourite hop and why?
Simcoe because it has a unique flavour while also having a wide variety of applications.

What is your favourite beer/food combo?
Any pizza with any pale ale.

Do you have a Brewing hero/inspiration?
It’s hard not to respect people like Mikkel Borg Bjergsø and Kristian Klarup Keller who set up Mikkeler. There are many cases in brewing of people giving up an established career to chase a beery passion and I think anybody who does that is inspiring too.

If you could brew one collaboration beer with someone who would it be with and what would it be?
Tough question. It would have to be with Schneider Weisse. I’ve always had a fondness for them as their wheat beer was one of my introductions to craft beer in general. Everything coming out of that brewery has been amazing, especially their collaborations. They bring together their traditional styles  with some modern twists perfectly. Some kind of aggressive stout/wheat mix. High alcohol, Irish Whisky barrel-aged.

If you could share a pint with someone dead or alive who would it be, what would be the beer and where would you have it?
My Mother, who is alive. At home sharing an imperial stout. She thinks she doesn’t like beer, I think she hasn’t given it a chance.

Which beer do you wish you had brewed?
Moa Whiskey Pilsner

How do you spend your time when you aren’t brewing?
Drinking, reading, exercising, travelling.

If you could have one superhero superpower what would it be?
Wolverine’s regeneration to keep that liver functioning.

Anything else you want to tell us?
Think you got it all covered!