Posted on December 10, 2009 by andyMogg in Meet The Brewer 1 Comment

Welcome to the first in a new series of articles on Beer Reviews, Hopefully it will give you a little in sight into the guys and gals behind some of the beers you drink.

If you are a brewer and i’ve not already asked you to join in then please get in touch.

First up we have Stu from Crown Brewery In Sheffield:

What is your brewery capacity?
4 barrels per brew 2 x week 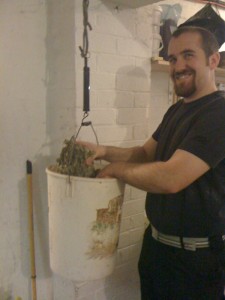 What is different about your brewery?
Big flavours, unusual styles mad brewer

How long have you been brewing for?
Crown 10years, me 2.5 years here & 4 years at Kelham Island before that.

How did you get into brewing?
One of my mates was head brewer at Kelham he asked me to work for him I was in to cask beer any way so I went for it. He left Kelham 9 months later and I was in charge.

What beers do you brew regularly?
HILLSBOROUGH PALE ALE 3.9% – Hillsborough Pale Ale is a modern English blonde beer brewed with cascade hops. The aroma is fresh and hoppy with citrus notes. Grapefruit and lemon linger on the pallet, with crisp bitterness lasting through the long finish, leaving your mouth refreshed and wanting more.

TRADITIONAL BITTER 4% – Traditional Bitter and was the winner of Sheffield Beer Festival 2007, It is a dark amber pleasantly hoppy and malty bitter. Just like hammerite it does what it says on the tin!

STANNINGTON STOUT 5% – The stout is black in colour with a ruby edge. The aroma is big and deep, with an espresso coffee and biter chocolate note, underscored by biscuity malt. Liquorice comes through on the palate while the better biscuity malt builds for a long finish with intense notes of coffee, chocolate and liquorice.

What special/seasonal beers do you brew?
WHEETIE BITS 4.4% – The beer is intensely aromatic with lots of lemony fruit, spices and a hint of white chocolate. There is plenty of yeasty aroma, that is quite high and floral. On the palate it is very easy drinking . There is plenty of racy citrus fruit and an underlying bitterness that adds a grippy edge. (NOTE: Read my review) 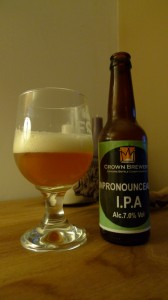 WHEAT STOUT 6.6% – This is a magnificently deep rich black coloured ale which when carefully poured delivers a find beer with a good thick creamy head. The aroma matches the strength of the beer, while predominately malty, has hints of hops and even some fruitiness. The taste is again powerful with coffee to the fore with chocolate malt balanced by a little sweetness. The aftertaste is dry and deep with hints of chocolate matching the intense maltiness. (NOTE: Read my review)

UNPRONOUNCEABLE 7% – It’s a punchy beer and pours a royal crown gold with a fluffy white head.Its hopped with 5kg of Bramling Cross (5kg in a 4 brl plant) and they come straight out in a plume of earthy blackberries. Its got a great nose, really fruity and juicy and reminiscent of picking berries from the bushes with pinkâ€”stained fingers. There is a great kick of bitterness to begin with and then it gives way to more fruity berries and hints of apple sucky sweets. Its full of flavour and very good plus its’ nice adversary to the super hopped U S style IPAs (NOTE: Read my review)

RING OF FIRE  7.7% -A beast brewed with fresh chillis and poured out a deep and dangerous chilli con carne brown beer with fiery red edge, it smells of dried fruit and stone fruits like a barley wine and then right at the end, like a cheeky littlesurprise, comes the fresh and slightly warming aroma of chilli. It tastes sweet, full bodied and richly fruity brew and then right at the end the chilli come in like a garnish of fresh green peppers. (NOTE: I helped brew this so it’s bound to be great) (NOTE: Read my review of the 10.3% version)

DJANGO REINHARDT 6.3%  – The Damson double porter was brewed with Zak Avery, (beer writer of the year 2008) This rich sweet porter is full of flavour and ideal as a winter warmer

Where do you think the future of brewing lies?
I think cask ale has grown nearly as much as its ever going to in this country, but the micro/craft brewers have got a lot more of the big boys share to take. I think during the next decade we will see a slow increase in the take home market and by the 20’s I see us having #1 a growing craft brewed real keg scene which will fill the gap in slower selling cask pubs or #2 a lot more pubs will be using cask breather systems.

What is you proudest moment in brewing?
I’ve had some great moments in my short brewing career so far, winning beer festivals but I would have to say that every week I’ll be stood at the bar and some one will come up and say something like ‘another pint o that pale ale please luv its reet nice’ those are the best moments because they don’t know who I am stood at the bar and its really honest. 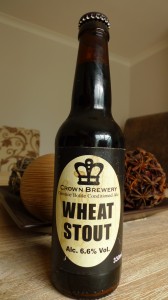 What was last beer you drank?
Sierra Nevada Pale ale draught at the opening of a new bar at Sheffield Train station

What is your favourite hop?
This is a very reacent thing for me Cascade but next year it will be something else.

What is your brewing ambition?
Win some sort of big award CBOB or BGBW brewer of the year

Do you have a Brewing hero/inspiration?
Sierra Nevada are a big influence at the moment

Which beer do you wish you had brewed?
Mmmmmmmmmmm lots but I’m happy with the brews I’ve come up with my self.

What’s Favourite hobby outside of brewing?

If you could have one super power what would it  be?
I would be the Master of Time and Space like Hiro in Heroes, I could go where ever I wanted for a drink. Do a pub crawl of the world in the blink of an eye.

Anything else you want to tell us?
Beer, helping ugly people have sex since ???

I would also like to add that Stu loves his hot sauce and probably gets through nearly as much of it as me.

Thanks for Stu for taking the time to complete this you can follow him on twitter here or visit their website here, if you are a brewer and would like to take part then please get in touch

One comment on “Meet the brewer – Crown brewer Stu”