It’s Thursday and that can only mean one thing, Meet the Brewer – this week it is the turn of  Dan Baxter from Abbeydale in Sheffield, I last drank one of their beers on Twissup and it was very good indeed.  So over to Dan to fill you in..

What is your brewery capacity?
We are in a state of transition at the moment. We have a brew length of around 16 barrels moving to 25 and we brew at least 5 days a week, sometimes 7 and occasionally twice in one day!

Over time, we have developed a good reputation for brewing outstanding pale hoppy beers across the ABV range from Matins at 3.6% to Last Rites at 11%.  A significant feature of the brewery has always been our pump clip artwork, designed by Ivan Bradley, which is striking, witty, very collectable and usually anticipated (especially our Dr. Morton’s Amazing Remedies beers). 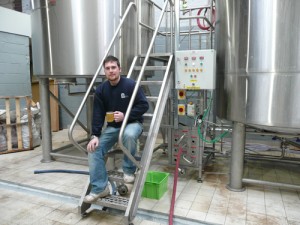 How long have you been brewing for?
2 years now.

How did you get into brewing?
Initially hired by Abbeydale as a sales man : which is still a major part of my job. I picked up the brewing process simply by watching & learning. Then, standing in whilst staff were away. Now I get to formulate my own recipes : Demon Drink was my first solo recipe and recently I devised the recipe for Dr Morton’s Headshrinker.
Working in the past in kitchens, I always got a great sense of satisfaction cooking food for a customer. However, the pressure is far too intense and therefore falling into the brewery trade has allowed me to still produce something for consumption but in a relatively stress free environment.

What special/seasonal beers do you brew?
At any one time we usually have two Abbeydale specials, the list is vast. We occasionally bring back old favorites; Belfry 4.5%, Alchemy 4.2%, Chocolate Stout 4.5%, Smoked Porter 4.8% to name a few. For Christmas we usually feature Advent 4.6% or White Christmas 5.2%. We also brew under the Beer Works name and create our Dr. Morton’s amazing remedies beers; Snake Oil 4.3%, Brainwash 4.8%, Mental Polish 4.2% and Clown Poison 4.4%. The list is endless. Let’s also not forget the festival charity beer we brew for our own beer festival : Sunfest 8th to 11th July 2010.

Where do you think the future of brewing lies?
Cask real ale remains a consistently growing market. For me the exciting thing is trying out new hops and then watching the reaction of consumers. If the cask ale market grows then it will be worth more people planting hops, who knows in a few years we might be  trying out hops from South America or China! That would be exciting.

What is you proudest moment in brewing?
When our Black Mass won beer of the festival at Oakwood last year, 2009. Now, we have won a number of awards in the past, however the gyle of Black Mass was one that I had made. My first beer fest award. Yay!

Do you have any brewing regrets?
Oddly enough one of my worst days in brewing was the time when I brewed the gyle of Black Mass which won Oakwood. Everything went wrong and brewing that day was not stress free. I managed to boil over the copper, covering the brewhouse in dark, sticky wort. A helpful colleague managed to put my aroma hops into the copper rather than the hop-back and an oil delivery in the middle of the boil meant that the boiler was turned off, no-one told me so it was 45 minutes before I realized the boil had stopped!  The boss christened the brew Dan’s Black Mess 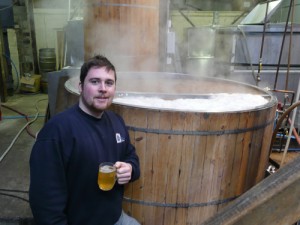 What is your favorite hop?
2008 season of Simcoe.

What is your brewing ambition?
To become a Master Brewer with my own brewery.

Do you have a Brewing hero/inspiration?
My inspiration comes from my father’s side of my family. My grandfather was a head brewer at the old William Stones Cannon Brewery at Rutland road in Sheffield. I did not know that brewing was in my blood when I started in the trade.

Which beer do you wish you had brewed?
Timothy Taylor’s Landlord. My favorite national beer from a well respected brewery.

Thanks to Dan for filling this in, you can visit his website here, you can also find their beers on in the Rising Sun in Sheffield!