Thursday can only mean one thing, it’s time for meet the brewer, this week’s featured brewer is Dave from Hardknott, AKA WoolpackDave. I’ve met Dave a couple of times and he’s a cracking bloke, game for a laugh and knows his beer, he is also great at writing about beer, pubs and the beer industry as his nearly award winning blog proves. So over to Dave.

2.25 brewery barrels per brew with 2 firmenters giving a maximum posible of 4.5 barrels a week. I actually do a little over 1 brew a month on average over the year but in the summer it can be as many as 6 a month. 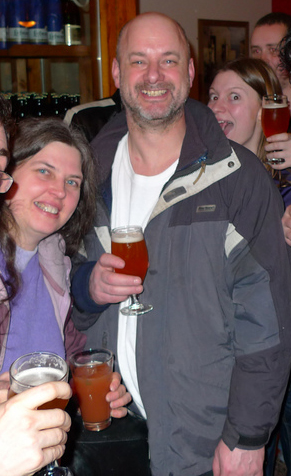 Me, I’m very different. My mum would say I’m special.

The beer it produces is only normally available in my pub, mainly because I work long hours and have no spare time to brew beer for other people to put their markup on. When I work out how to limit my working week to 150 hours, then my beer will be available elsewhere. So, if you want my beer come to my pub.

OK, winge over, the other thing that is different is that the beer is made from pure fell water. It’s pure, that is, once we’ve filtered out the dead sheep and eels. We are the only brewery that makes beer from water that comes directly off the flanks of the highest mountain in England.

4 years. We started in December 2005. The first beer was casked on Christmas eve and was on the bar for New Year’s Eve.

We have a very large building parts of which were underused. We felt that it would help our business if we could get into the Good Beer Guide and felt that brewing our own beer would help with that. My father insisted it would be a good thing to do and because most people refuse to listen to their parents I came up with all sorts of excuses why I shouldn’t.

One day I woke up, smelt the coffee and decided to listen to my Dad for a change. 6 months later we were brewing beer. It’s nice to be able to say to people when they ask what is the most local brew that my own is and it’s brewed just the other side of the wall.

Light Cascade 3.4% has a good strong grapefruit pithy bitternes great for slaking the thirst after a long sunny day on the fells.

Saazy lamm 4.3% light mild and unchallenging to the taste buds, but is great on a hot sunny day with it’s light Saaz hop flavours.

Tenacity 4.8% is a strong willed beer and you are advised not to challenge this one unless you plenty of gumption.

When I started brewing I used the excuse of product development as a reason to experiment. I now just experiment because I like to. I’ve made a ginger beer called Woolly Fusion, a beer called Drive Me Mild at 1.9%, geddit? I’ve currently got a stout at about 7% maturing in a whisky cask and a barley wine at 10.3% maturing nicely.

I think the answer is beer, lots of it. More variety is important and encouraging pubs to stock a more interesting range. Getting Landlords to understand more esoteric beers and being able to advise customers on the beer would be useful.

Oh, there you go, asking me for my bestest of. I’ve had loads of proud moments. Probably the best bit is when you are hanging around the bar, the barman has served the beer and the punter doesn’t know who you are and you hear somebody say, out of ear shot of anybody they think have a link to the pub “That’s a really nice pint that” – you know it’s complete honesty and just not politeness.

Zippy Red IPA 6.6% a beer that is dark for an IPA. Brewed by me. 7 months matured dry hopped beer. 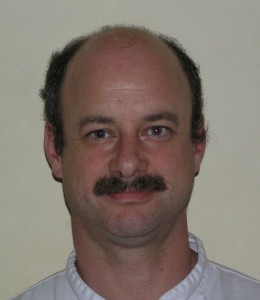 Is this Dave or is it poirot?

More favs! Stop it! OK, probably Cascade and Centennial at the moment.

To make lots of nice beer. Really, that’s it, just to get better at brewing and make an honest living at it.

Ah that’s better, giving me the option to say “no” – Probably Martin Dickie of BrewDog or John Keeling of Fullers because I have met them and they are both great brewers. John Lloyd at Barngates makes the best beer in Cumbria, after me that is.

Tokyo*, although it might be Tactical Nuclear Penguin after I’ve tasted that.

Ice climbing, although I haven’t done that for years. Playing music would be next. Skiing also rates high but I have not done much since I broke my leg whilst pretending that it’s still possible to ski in Scotland.

The beer world is great, it’s a broad church with lots of great people. I think that the future of beer is very exciting as more people wake up to the posibiltities of craft beer. I hope that in the next decade there will be an increase of availability of interesting beers in pubs. I also want to see an increase in qulaity beers being available in restaurants.

Thanks to Dave for taking the time out to do this, I know he is a busy (if rather secretive) guy and has a lot on his plate with blogging, running and decorating his pub, not to mention keeping WoolpackAnn happy!

Ps Sorry for nicking that photo from your facebook Dave, but I couldn’t resist, it reminded me of someone other than Poirot but I couldn’t put my finger on it so thought one of  our readers might be able to..