This week’s Meet The Brewer Comes from one of the stars of the recent Beer Tickers film and who has even had a beer named after him, its none other than Dave Unpronounceable from Steel City Brewing. 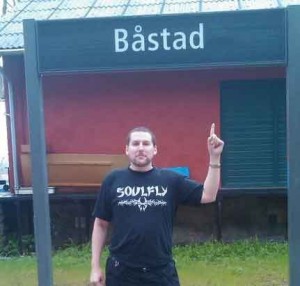 What is different about your brewery?
Mainly that we don’t have one! We are what is known in Europe as a cuckoo brewery, insofar as we use an existing brewery (Little Ale Cart), which we rent on a daily basis. We also have a 10-gal boiler and fermenter, which we use to make ‘first-runnings’ specials – as the name suggests, we take the first runnings from the mash tun, and boil it separately to make a single firkin of a high-gravity special. These will usually be found in the Cask & Cutler, sorry, Wellington in Sheffield

How long have you been brewing for?
As Steel City, just short of a year – I also brewed for Moor for a couple of years about a decade ago

How did you get into brewing?
Drinking, then homebrew, then occasional commercial brews for my birthday etc, then part time at Moor, then full time… then 10 years of accountancy! Still counting beans now, but got the brewing as a sideline

What beers do you brew regularly?
No one beer, but 90% of our output follows the same formula – pale and very hoppy!

What special/seasonal beers do you brew?
We brew once per month, a different beer each time. A lot of our output is named after what we term ‘proper music’, beers so far include 51st State, Black No 1 (our first and so far only stout) and A Slight Case of Overhopping (if you spot all 3 references, I commend your taste!). We like extremes, neither of us like middle-of-the-road brown beer, we like either pale and over the top hops, or thick black stout. We also like a lot of foreign styles, and will be looking to incorporate these into our range – so watch out for Hopfenweissbier, Alt, Kolsch, etcâ€¦ don’t know if we’ll dare to do a lambic though!

Where do you think the future of brewing lies?
Firmly in the craft beer sector. More people than ever are waking up to the sheer range of beer types available – a far wider scope of flavour than wine could ever achieve. But quality differentiation is the key to success – the breweries that will grow are the ones that put decent beers out there e.g. Thornbridge, Brewdog, Pictish, Marble etc, and not the ones who come along and brew the same brown malty ‘traditional’ bitter as 90% of brewers in the country (and crucially, the same as the big boys are brewing) 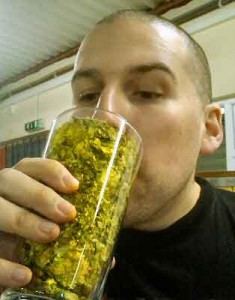 Dave get's stuck into some hops

Do you have any brewing regrets?
That when I was at Moor I didn’t have access to all the wonderful hops that we use now – I’m a total hophead, but it wasn’t ’til I first went to America that I properly realised it!

What is your brewing ambition?
To help the craft beer revolution educate people to the extent that the masses turn their back on Greedy Kerching and InBred and drink what they actually like, not what the tv tells them they like

What was last beer you drank?
Funnily enough, our own Slight Case of Overhopping. That was 4 days ago, must do something about thatâ€¦

What is your favourite hop?
several! mostly beginning with ‘C’â€¦ if I really have to pick, I’ll take Chinook, but I’m also very fond of Columbus, Citra, Centennial and Cascade, as well as Nelson Sauvin and Green Bullet

Do you have a Brewing hero/inspiration?
no one person, but the whole US beer scene has inspired me – I really did come back thinking ‘why can’t someone brew this sort of thing back home’

Which beer do you wish you had brewed?
Green Flash IPA

Favourite hobby outside of brewing?
Travel. So far been to about 45 countries, so about 250 to go! Best places I’ve found for beer are Czech Republic, Germany, Argentina and of course America

If you could have one superpower what would it be?
The ability to get a full night’s sleep in 20 minutes!

Anything else you want to tell us?
Up the hops!

Thanks to Dave for filling this in, you can visit his website here or check them out on Facebook