I’ve decided to publish number 3 in our Meet the Brewer series a little early this week, anyone would think it was Christmas!I first came across Great Heck Brewing on Twitter and wanted to find out a bit more about them so was pleased when Denzil agreed to join in with Meet the Brewer.

So over to Denzil… 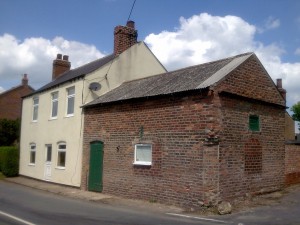 What is your Brewery name?

We’re cask only – no bottled beer at all. We produce beers we would like to drink ourselves and between myself, Jason and our two beer swilling wives we have quite widely divergent tastes – hence plenty of variety.

Jason taught me to brew after we opened the brewery! 2008.

My business partner, Jason Hall and I both raced motorcycles with the Auto66 club, a roadracing club based at Driffield: they organise the Oliver’s Mount meetings at Scarborough. We used regularly to have bike racer BBQs in my back yard and Jason, a long time home brewer would provide the beers.

As is the way of these things, one drunken conversation led to another and somebody said, “If you ever pack in racing Denzil, we could have a brewery in that shed where you keep your bike stuff.”

Here we are! We actually started out with the idea that it would be a hobby and that we would just brew beers to please ourselves and whatever got sold to pubs or whatever was a bonus. We envisaged brewing a couple of times a month. Maybe every week near Christmas and we’d both keep our jobs.

Jason still works full time in a senior engineering role at Cummins Turbo Technologies at Huddersfield, which is a pretty demanding job, but I’ve been working full time for the brewery since September 2008 when my previous employer went bust. The timing of that was great because we’ve gone from strength to strength since then. We now brew three times per week and have me as a full timer as well as a second part time employee plus Jason does his bit at weekends. 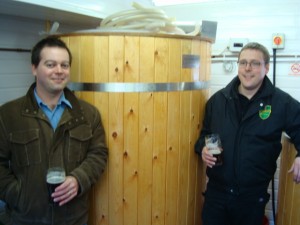 Far too many! It’s impossible to know which ones to drop.

Yorkshire Navigator 3.9% ABV:
A Traditional dry mahogany coloured bitter made with lashings of American hops for a delicious aroma and fermented with a Belgian yeast strain which adds its own fruity smoothness to this dry session ale.

Staggering Genius 5.0% ABV:
A Yorkshire Wheat beer with buckets of Styrian Goldings hops balancing the full, rich flavour of the malts. Pale in colour. The blurred writing on the pump clip is a safety device. If you can read it clearly, stop drinking immediately!

White Rabbit: 3.8% ABV
Pale and hoppy. A very pale session ale with a distinctive and refreshing bitterness. A perfect thirst quencher for spring and summer.

Slaughterhouse Porter: 4.5% ABV:
From a converted slaughterhouse in the heart of the Yorkshire coal field Great Heck Brewery brings you a full bodied, silky smooth traditional stout porter whose delicious malt palate is delicately balanced with Target hops. Very black at first sight, hold it up to the light to see its true colour.

Bar Humbug: 4.5% ABV:
Christmas Special. Reddish brown in colour and delicious subtle hints of spiciness from the distinctive flavour development of the yeast and American hops. The perfect festive pint.

SBH Celebration Ale: 4.1% ABV:
Great Heck’s first traditional amber coloured bitter, conceived by our head brewer Jason Hall to celebrate the birth of his first child Siobhan Beatrice who arrived on 12th August 2008. SBH brings you a rich and deeply enjoyable flavour from a carefully selected blend of five different malts combined with a touch of roast barley. With a preponderance of Fuggles hops and late hopped with aromatic Slovenian Aurora for a finish to savour.

We also brew own label beers for certain pubs as well as Final judgement and Final Straw, the house beers at The Judge’s Lodgings, York. 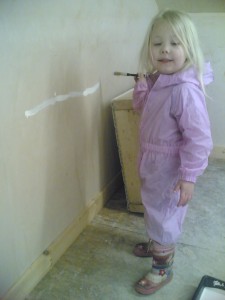 Lucy helps turn the workshop into a brewery!

I think that as long as the trend for small brewers producing interesting and enjoyable beers continues, the recruitment of new real ale drinkers will continue. I also believe that with more small breweries springing up beer will tend to be more locally sourced and regional beer styles may emerge, or re-emerge. For example, in certain villages around here they won’t drink pale ales at all.

Dave being voted beer of the festival at Wakefield CAMRA last year. That doesn’t often go to an out of area brewery.

I’m one of life’s strivers. I don’t really identify particular ambitions because that implies that having reached that goal I would be content to stop trying to improve or do more or do it better. I can’t imagine retiring or ever being completely happy with what we do.

Angus Young says he is still learning guitar. I wouldn’t compare myself to the great man but I think that’s a top quote. The constant incremental improvement of everything, one thing at a time is something I hope and expect to be pursuing for the rest of my life.

Sue and Keith Simpson (Brown Cow Brewery) are the very embodiment of what it’s all about for me. I’d carry their bags any day.

I like playing music. I do acoustic nights, folk clubs and open mikes etc. with guitar and vocals. I’m also now in a band called Deep Blue Nothing. We don’t have much repertoire as yet but it’s a hell of a lot better than listening to me on my own!

Yes, our web site STILL hasn’t been done (Note: Denzil if you need a hand with it in the new year let me know…i know a man ;o) ) but we now have a Facebook fan site which is probably worth subscribing to. Just search Great Heck Brewery on Facebook.

Also bike racing fans, watch the progress of British Superbike 125GP championship contender (runner up 2009) Rob Super-Dave Guiver in the 2010 British Superbikes 125GP class as he’s carrying Great Heck sponsorship all season along with the rest of the SP125racing.com team.

Thank’s to Denzil and Jason for taking time out of their busy brewing schedule to answer our questions, if you see their beers in pubs please try them and let me know what you think.